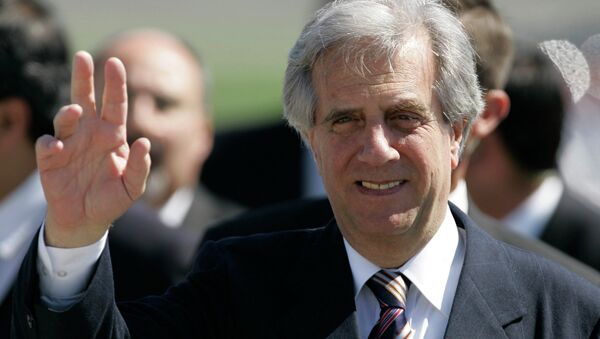 Tabare Vasquez has won the Uruguayan presidential race with 52.8 percent of the vote. He returns to power after serving as the country's president from 2005 to 2010.

"I promise to work my utmost but I cannot, should not and do not want to work alone, I want to count on all Uruguayans," Vazquez told his supporters, as quoted by Reuters. The leftist politician served as Uruguay’s president from 2005 to 2010 but could not run for reelection under the current constitution.

RT TV Channel to Present Day with ‘Poorest President’ Jose Mujica
Vazquez succeeds Jose Mujica, a highly popular president who had to step down after serving his term. Mujica gained popular support for social reforms, including legalization of marijuana, abortion and gay marriage, and down-to-earth style, BBC pointed out. Mujica has been labeled "the world’s poorest president".

Vazquez has promised to grant people "more freedoms and more rights," as well as promote "more economic, social and cultural development," as quoted by AFP. He also seeks to reform the education system and fight crime, according to BBC.

"A third Broad Front government will show the world that Uruguay can be progressive and successful, reducing poverty while boasting an economy performing better than ever," said pizza chef Richar Martinez, 39, who voted for Vazquez, as quoted by Reuters.

Uruguayan President Refuses to Sell His Old Volkswagen Beetle for $1Mln
"The economy is rising. The country isn’t anything like it was 10 or 20 years ago, when it was in decline," said Javier Silva, a supporter of Vazquez, as quoted by the Guardian.

Both Vazquez and Mujica are members of the Broad Front, a left-wing coalition, which won parliamentary elections in late October.