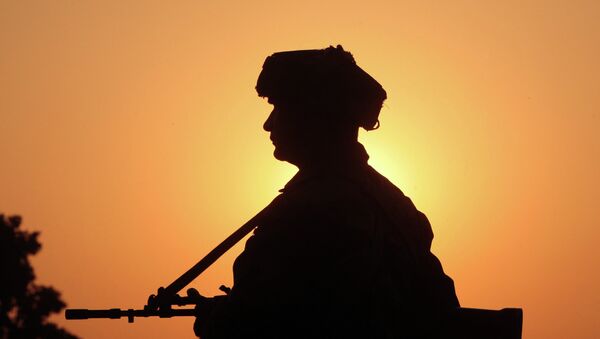 © REUTERS / Mukesh Gupta
Subscribe
Indian National Investigation Agency has submitted a proposal to criminalize the activities of IS, al-Qaeda in Iraq and Syria, and to ban the groups.

The IS are "trying to recruit new cadres from India with an aim to engage and train them in the terrorist activities in Syria and Iraq region. Once they indoctrinated and trained ISIL [IS] would deploy them to cause terrorist attacks in India," the report said.

According to the report, prepared by the Indian Home Ministry on the basis of the Intelligence Bureau's estimates, the country's National Investigation Agency (NIA) has submitted a proposal to criminalize the activities of IS, al-Qaeda in Iraq and Syria and their formations, and to ban the groups.

The Home Ministry also requested the NIA to conduct a probe into two residents of India's southern state of Tamil Nadu, images of whom wearing T-shirts with the letters ISIS [IS] were uploaded to a Facebook account.

On Saturday, Indian Home Minister Rajnath Singh admitted that the IS represented a major security threat to the country. He also expressed concern about the impact of IS propaganda on the Indian youth.

Islamic State May Be Preparing Lone Wolf Attacks in India: Reports
Earlier this week, Indian media reported that a man called Areeb Majeed, suspected of killing some 55 people while fighting within the IS ranks, has been detained. The NIA have questioned Majeed on how did he get into an IS camp in Iraq and on his activities as an IS fighter.

The IS Sunni extremist group has seized vast areas across Iraq and Syria and proclaimed a caliphate over the controlled territories in June. The United States and its allies are currently conducting airstrikes against the insurgents on both Iraqi and Syrian territory.

The group is infamous for its active propaganda campaign on the Internet. According to UN estimates, around 15,000 people from 80 countries have entered Syria to join the IS or other terrorist groups since 2011.