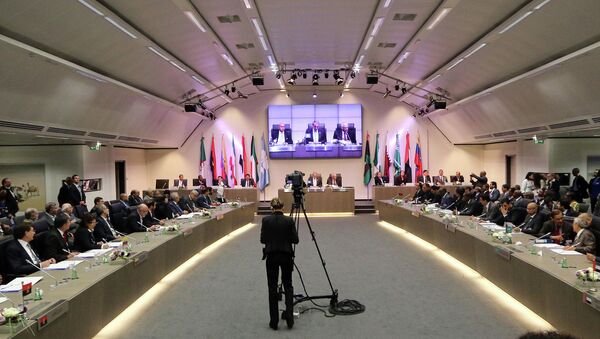 © AP Photo / Ronald Zak
Subscribe
Members of the Organization of the Petroleum Exporting Countries have decided not to cut oil production during the group's meeting in Vienna Thursday.

Russia and OPEC: An Unlikely Alliance
VIENNA, November 27 (Sputnik) – Members of the Organization of the Petroleum Exporting Countries (OPEC) decided to maintain oil extraction at current levels at a meeting in Vienna Thursday.

The price of Brent oil fell below the benchmark level of $75 per barrel upon the announcement.

An OPEC meeting was held in Vienna, where the group's member countries gathered to discuss a possible curb of oil output amid the falling of oil prices by about $40 per barrel on the global market.

Crude oil prices have fallen some 30 percent since June as the United States has increased its production, and demand has lowered amid slowing growth in China and Europe.

On Tuesday, a separate meeting between OPEC-members Saudi Arabia and Venezuela, and non-members Russia and Mexico was held, however, it did not result in an agreement to curb output.

The OPEC accounts for a third of global oil output.

Thursday’s decision by major oil-producing countries to maintain the current oil output means that the problem of global oil oversupply is unlikely to be solved anytime soon, a Russian Finance Ministry official said.

Oil Price Drop: Who Stands to Gain?
“The market remains in the state of excessive supply and this decision means that the problem will not be solved quickly,” said Maxim Oreshkin, the head of the ministry's long-term planning department.

“In such circumstances, even the scenario of $80 per barrel already appears to be moderately optimistic,” he said.

Members of the Organization of the Petroleum Exporting Countries (OPEC) need more time for consultations on current oil trends and to assess the market response to OPEC's decision not to cut production, the Iranian oil minister said Thursday.

"We need more time to look at the markets response to the current low price and more consultations between OPEC members," minister Bijan Zanganeh told reporters following the meeting.

"There is certainly an oversupply on the market, but it is difficult to deal with it," he also said.

OPEC ministers agreed on Thursday to hold next meeting in June 2015 in Vienna.

"The most important thing today is to stabilize the market and ensure future investments in deliveries," Mazrouei said prior to the OPEC meeting.

The minister noted that at the moment the oil market was over-saturated but said that it did not happen due to the OPEC countries' activity.

According to Mazrouei, the oil market was in the process of stabilizing. He explained that the market was fundamentally stronger than it appeared.

Earlier this week, Saudi Arabian Oil Minister Ali Naimi said that he expected the oil market "to stabilize itself eventually."

One of the reasons for the current decline in oil prices is the speculative factor amid strengthening of the dollar and uncertainty in global economic growth, Libyan Vice Prime Minister Abdourhman Ataher Ahirish stated Thursday.

"Ample supply, moderate demand, a stronger US dollar and uncertainties about global economic growth have been key factors in this recent price trend. In addition, as OPEC has noted in the past, the impact of speculative activity in the oil market has also been an important factor," Ahirish, who is also President of the OPEC Conference, said at the opening of the group's 166th session.