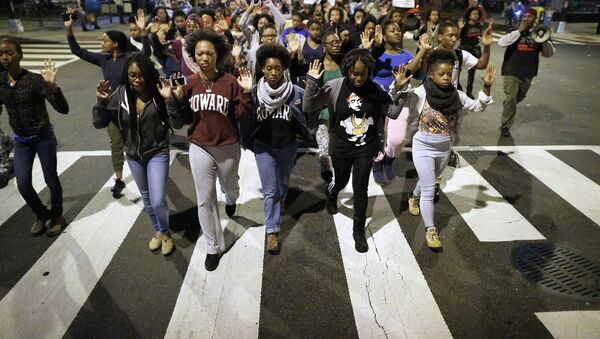 An internet campaign urging US shoppers to forego the Black Friday sales event in protest over Monday's grand jury ruling not to press charges against the police officer who killed Michael Brown has gone viral, gathering millions of supporters in less than 48 hours.

MOSCOW, November 27 (Sputnik) — An internet campaign sparked by Monday’s grand jury ruling to not press charges against the police officer at the center of the August shooting of Michael Brown has gone viral, garnering millions of supporters in a matter of hours.

The online campaign, known as ‘No Justice, No Profit’, was initiated by the Justice for Michael Brown Leadership Coalition Tuesday to protest the St. Louis County’s grand jury ruling not to charge officer Darren Wilson in the shooting death of 18-year-old Michael Brown, and has since spread across social media, including Facebook and Twitter. The campaign’s supporters see the ruling as symptomatic of larger problems afflicting the US criminal justice system and its purported discrimination against African Americans and other minorities.

Twitter hashtags including #BoycottBlackFriday, #BlackOutFriday, #NotOneDime, #HandsUpDontSpend and #DontRiotDontBuyIt have garnered millions of virtual supporters for the initiative to forgo shopping during this Friday’s Black Friday sales bonanza. The campaign has attracted support from celebrities and businessmen, including hip hop music and clothing magnate Russell Simmons and actors and television stars including Michael B. Jordan, Isaiah Washington, and Jesse Williams.

Journalist Patrice Grell Yursik explained in her blog that “economic activism is a time-honored tactic,” and “a way to send a message to the government, big business, all the while simultaneously bolstering our nationwide community.” She urged those participating in the protest not to boycott small, black owned businesses.

A YouTube video by the Blackout for Human Rights activist group features scenes of police brutality to the tune of the famous Christmas song, “It’s the Most Wonderful Time of the Year”. The group, organized by indie filmmaker and rights activist Ryan Coogler, urges viewers to “help stop police brutality by $peaking a language everyone understands,” telling them: “Don’t shop November 28th.”

Twitter users have been reading, retweeting and commenting on the campaign. One user urged his fellow Americans: “Do NOT shop on ANY Black Friday sale day. Thursday-Monday. Don’t spend one dime!” Another noted that “Economics has to be part of our strategy. Money as a megaphone saying killing is unacceptable.”

Black Friday, the day following Thanksgiving, is known in the United States as the first day of the Christmas holiday shopping season, and is the biggest shopping day of the year. Retailers often offer massive discounts in order to encourage buyer turnout, and expect huge sales volume in return. This year the US National Retail Federation has projected 140 million shoppers coming out and over $60 billion in sales, the Wall Street Journal earlier explained. The viral campaigners hope to challenge that. The Guardian has noted the difficulty activists face in challenging the shopping event, stating that “against them is the full weight of a consumer culture that equates happiness with spending.”

The viral campaign follows protests which have raged in the United States and in countries around the world this week following Monday’s verdict. Missouri pastor Reverend Spencer Lamar Booker exclaimed following the court’s decision that “no matter how convoluting his [Prosecutor Bob McCulloch’s] and others’ attempts to make a legal argument, an illegal act was committed called murder.”

This is not the first attempt to thwart the Black Friday buying binge, which many consider a less savory aspect of American society. The anti-consumerist magazine Adbusters declared the day after Thanksgiving ‘Buy Nothing Day’ for the first time in 1997. The event has been held every Friday following Thanksgiving since, prompting similar campaigns in over 50 countries. When Adbusters attempted to promote the campaign on television, however, they were refused advertising time by every major network except CNN.