EU Will Survive Without Britain, but Would Be Dead Without France: EU Chief 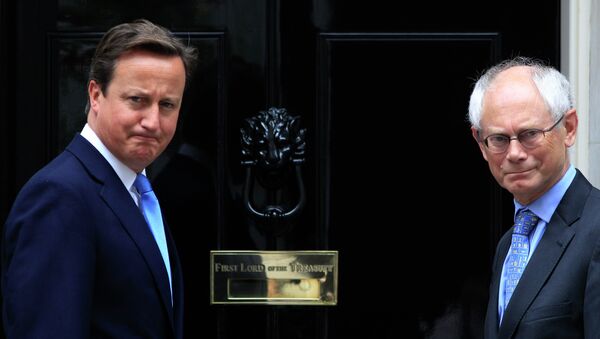 © AP Photo / Lefteris Pitarakis
Subscribe
International
India
Africa
The outgoing President of the European Council, Herman Van Rompuy, has criticized the UK but said that Brussels would not negotiate on the fundamental principles of the EU just to convince London to remain part of the union.

MOSCOW, November 27 (Sputnik) — The European Union will survive if Britain opts to leave it, but would be dead without France, outgoing President Herman Van Rompuy said on Thursday.

“Without the United Kingdom, Europe would be wounded, even amputated – therefore everything should be done to avoid it,” The Telegraph quoted him as saying at a farewell lecture in Paris ahead of his departure at the end of this month.

“But it will survive. Without France, Europe — the European idea – would be dead.”

His comments come as relations between the EU and Britain are heating up.

UK Prime Minister Accused of Inability to Clarify Position on Leaving EU
British Prime Minister David Cameron has pledged to renegotiate Britain’s relationship with the EU as he is coming under growing pressure within the country.

Up to half a dozen members of the cabinet believe Britain should leave the EU if David Cameron fails to deliver a major overhaul of Britain’s membership terms.

Cameron is expected to make a speech this week outlining his plans to reform the relationship between the EU and Britain, including possible restrictions of the free movement of people within the EU.

Van Rompuy therefore suggested that the 27 other countries of the EU would be open to listening to David Cameron's demands for change, but would not reconsider the fundamental principles of the EU and that the union would not negotiate on the right of workers to travel freely between member states.

“This is primarily a British debate. It is for the British people to decide. I think that the European partners would be ready seriously to examine those demands which are important for London, but not to negotiate on the fundamental principles of our union,” The Telegraph quotes him as saying.

Reports suggest that the UK will now be legally indebted to make up a share of the EU’s £259 billion shortfall by 2020;  the nation’s Treasury would be responsible for paying an estimated £33.7bn, calculated at the usual rate of Britain’s EU contributions.

This represents a political disaster for the British prime minister, who has made repeated pledges to lower the amount Britain contributes to Brussels’ budget.