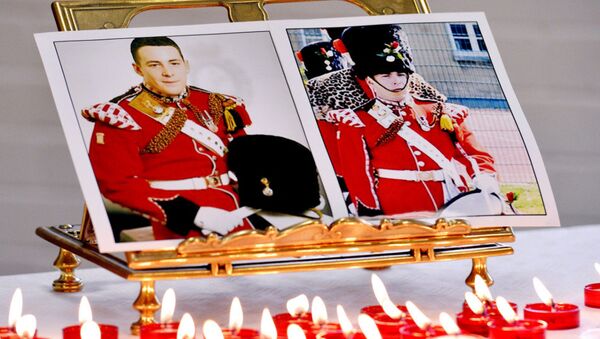 A report into the murder of Lee Rigby, suggests there was a “significant possibility” MI5 could have prevented his death had they been aware of an online conversation involving one of the killers.

Tuesday’s report by Parliament’s Intelligence and Security Committee into the actions of the British security services leading up to Fusilier Rigby’s death found that there had been delays and errors in seven separate investigations. However, taken individually they would have made no difference. The report also suggests that major internet companies could be doing more to help.

A ‘web chat’ between one of the men who hacked Rigby to death — Michael Adebowale and a person codenamed ‘Foxtrot’ in December 2012, in which Adebowale expressed his intent to murder a soldier in a “graphic and emotive” way, could have made a difference. The committee’s chair, Sir Malcolm Rifkind, said that the exchange of online messages less than six months before the Fusilier’s death was “highly significant” and “there is then a significant possibility that MI5 would have been able to prevent the attack.” Although the report does not name the specific internet site where the chat took place, it’s been widely reported as Facebook.

The internet giant has since come out and said that it doesn’t allow terrorist content on the site, and aimed to prevent people from using it for extremist purposes. But in a debate in Parliament on Tuesday afternoon, MPs called for more to be done to address the perceived inaction by US internet companies to act on terrorist material posted on their sites. Sir Malcolm said that “they are providing a safe haven for terrorists” while Prime Minister David Cameron said the companies have a “social responsibility” to address these issues.

It has been reported that the government may use this report as an opportunity to gain more access to communications material, forcing internet companies to make information available to the police and security services. This has already been met with widespread criticism from human rights groups.

The newly appointed head of GCHQ, Robert Hannigan, recently said that major technology companies need to cooperate with the security services to tackle extremism. In an article for the Financial Times, he wrote that some internet sites were “in denial” about how they were being used by radical groups. The former civil servant said ISIL had used “messaging and social media services such as Twitter, Facebook and WhatsApp, and a language their peers understand” as “noisy channel[s] in which to promote itself.” He suggested that companies have become “the command and control networks of choice for terrorists and criminals” and the British security services couldn’t address the issue of tackling extremism online “without more support from the private sector, especially from Silicon Valley.”

It’s certainly the case that extremist groups are using social networking sites as a platform to voice their beliefs. Since December 2013, the British government’s Counter Terrorism Internet Referral Unit has removed over 30,000 pieces of online content that “encourage or glorify acts of terrorism.” Ayman al-Zawahiri, the leader of al-Qaeda, has said that “more than half the war is taking place on the battlefield of the media.” Extremist groups’ use of social networking sites has grown exponentially in recent years, especially by the insurgent group ISIL. The recent beheadings of Britons and Americans by members of ISIL, shown on websites such as Twitter, have highlighted how radical groups can use the medium to maximum advantage. Although these videos, posts and comments are often eventually removed, they can be viewed around the world in a matter of minutes having already reached millions.

Milo Yiannopoulos, a tech columnist, said that the government requires more powers to access information from these sites. “These companies have shirked this responsibility for way too long, they are indeed in denial about how their services are used by terrorists, criminals and all manner of other unpleasant elements,” he said. “They need to work in much closer harmony and cooperation with the intelligence services.”

However, human rights groups have urged MPs not to refrain from a knee-jerk reaction following the release of the report. Big Brother Watch said that “the conclusion that a failing of an unnamed technology company should determine future legislation, whilst the catalogue of errors by the intelligence agencies is all but excused, is of grave concern,” while Liberty said that the ISC had “shamelessly” spun the facts in order to blame the communications companies.

The argument put forward by human rights organisations is quite simple — they feel that surveillance on sites such as Facebook is an infringement of civil liberties. But the tragic death of Lee Rigby was a highly publicised murder which tugged at the heartstrings of the British population. Tuesday’s report, which found that Fusilier Rigby’s brutal murder could have been prevented, had the authorities been informed about this online exchange, could be a useful weapon for those in Westminster wanting to push further surveillance laws through in future.