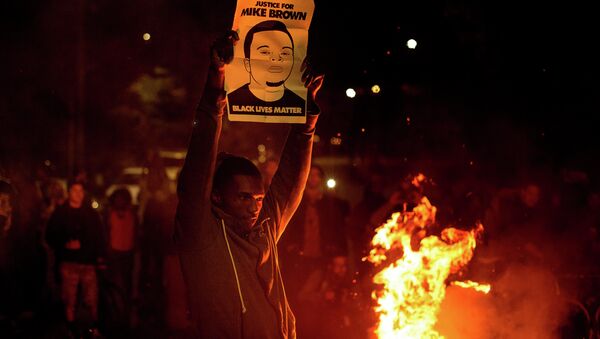 © AP Photo / Noah Berger
Subscribe
Some 350 people were arrested Tuesday night in peaceful protests all across the US against the Monday's grand jury decision in Ferguson, Missouri, not to indict police officer Darren Wilson for the fatal shooting of the 18-year-old African-American Michael Brown in August.

WASHINGTON, November 26 (Sputnik) - At least 350 people were arrested Tuesday night in largely peaceful protests around the United States, following a Monday verdict in Ferguson not to indict the police officer, who shot the 18-year-old African-American Michael Brown, according to local police.

In Los Angeles alone 187 arrests have been made, with dozens reported in other cities around the US.

The Los Angeles Police Department said that 157 were arrested for disturbing the peace, one for battery of a police officer and 15 juveniles for curfew violations.

In Boston, the police department said 51 disorderly conduct arrests were made, while a New York City police official told Sputnik 10 people were arrested for resisting arrest and obstruction of government administration.

In Atlanta, around two dozen arrests were made, the city’s police chief said at a Tuesday night press conference.

Another 92 were arrested in Oakland, according to police officials.

And in Ferguson, where outrage over the no-indictment verdict led to vandalism and clashes between police and protesters on Monday, at least 44 were arrested on misdemeanor charges. Police Chief Jon Belmar described at a Wednesday morning press conference a «much better night» on Tuesday.

Smaller numbers of arrests were reported in other cities across the United States, including Dallas and Denver.

Tuesday's call to protest came following a Monday grand jury decision in Ferguson, Missouri, not to indict police officer Darren Wilson for the fatal shooting of the 18-year-old African-American Michael Brown in August.

Capt. Ron Johnson - "some of the peaceful protesters were actually helping us tonight." #Ferguson

The jury’s decision came after nearly three months of deliberation over a case that reignited issues of race and police brutality throughout the United States, inciting massive protests around the country over the summer.

Thirty-eight US states, Washington DC and over 170 other US cities organized demonstrations throughout the day on Tuesday under the banner of «Emergency Response Protests to Ferguson Grand Jury Decision."