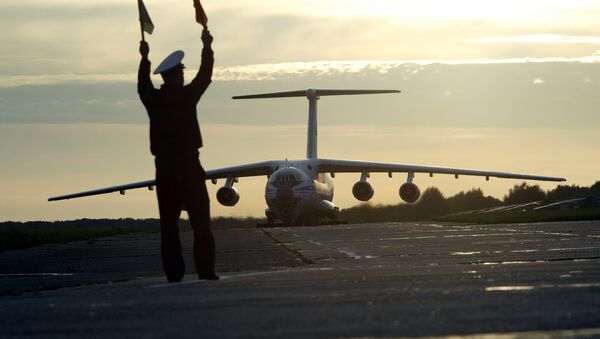 © Sputnik / Igor Chuprin
/
Go to the photo bank
Subscribe
The Il-76MD-90A, a heavily modernized variant of the Il-76 multi-purpose cargo plane, has been delivered to its customer, Rossiyskaya Gazeta has reported. The plane is the first of many expected to be delivered to customers over the next several years.

MOSCOW, November 22 (Sputnik) — The first of a series of modernized Il-76MD-90A multi-purpose cargo airplanes has been delivered to its customer – the Taganrog-based Beriev Aircraft Company, Rossiyskaya Gazeta has reported.

The Ulyanovsk-based Aviastar SP aviation factory first began production of the modernized Il-76 two years ago. The new model has been found to be very reliable in difficult conditions, military testing concluding that the plane is highly suitable for extreme conditions, including landing in conditions of multiple engine failure with maximum payload on board, and landing in ice and rough terrain conditions (the Il-76 has made multiple successful trips to Antarctica in the past).

While the exterior of the new plane remains virtually the same as its predecessor, its components have seen a heavy modernization. This includes a modernized system of cockpit electronics, a powerful new flight navigation system, digital autopilot, and new, more reliable engines which meet current and prospective requirements of the International Civil Aviation Organization.

Test pilot Nikolai Kuimov told Rossiyskaya Gazeta that the Il-76MD-90A “does not simply match Western aircraft, but in many ways [even] surpasses them.”

The next modernized Ilyushin is expected to be handed over to the Ministry of Defense in December. The head of Aviastar SP Sergei Demyentev told Rossiyskaya Gazeta that 13 machines are in various phases of readiness, and that two will be handed over to their government buyers next year; Demyentev noted that the company also has plans to build a new, modernized tanker variant of the airplane. “By 2018, the production volume of these two planes [the Il-76MD-90 and the Il-78 tanker] is expected to reach 18 aircraft per year,” Demyentev said. JSC Ilyushin General Director Sergei Sergeyev had earlier said that plans exist to actively promote the aircraft in the commercial market, as well, including for export.

The Il-76 was originally introduced in the 1970s, and has seen widespread use in Europe, Asia and Africa in roles including transport aircraft, airborne refueling tanker, firefighting tanker and military command center. About a thousand aircraft had been built since the planes’ introduction, over a hundred among them exported abroad. The deep modernization of the Il-76 took about five years, with the first test flights carried beginning in September 2012.