Iran Talks Not to Yield Results Due to US Domination in P5+1: Experts 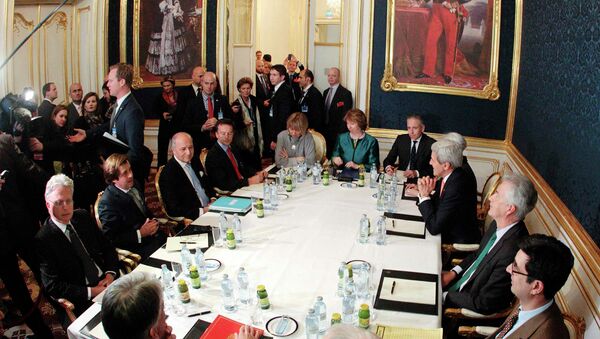 © REUTERS / Heinz-Peter Bader
Subscribe
Iranian experts claim that the talks between the P5+1 and Tehran on the Iranian nuclear program will not resolve in an unbiased agreement due to US domination in P5+1.

MOSCOW, November 21 (Sputnik) – The talks between the P5+1 and Tehran on the Iranian nuclear program will not resolve in an unbiased agreement due to US-dominated stance of the negotiators, Iranian experts argue.

“I believe that the P5+1 is not the internationally based framework, it is dominated by the United States view and I do believe that other actors do not play a positive role in shaping US views towards the whole problem,” Professor with the Faculty of Law and Political Science at the Allameh Tabatabai University Gholamali Chegnizadeh said.

Chegnizadeh stressed he was pessimistic about the outcome of the negotiations, explaining this by lack of key factors which could lead to a solution. The professor stressed that the current political approach would have an adverse effect on Iran.

“I believe that in order to resolve the conflict, or the case, Iranian nuclear program needs three elements: first is proper framework, clear aim and the third is effective strategy. Because of problem and shortcoming in all of these three, I hold with you from the start that the talk will not result in a proper conclusion and it would not push Iranian for compromise. Rather, it would turn the Iranian politics into radicalization and also for resistance,” Chegnizadeh stated.

Chegnizadeh also criticized US stance on Iran, saying it lacked a good expert view on a current state of affairs in Iran.

“They [the United States] get all the information from two sources: from the Iranian opposition and from Israel,” the expert concluded, adding that these sources lead to the incorrect perception of Iran. He also remarked that Iran was not in the exhausted position due to the sanctions, the goal the West is trying to achieve.

Mostafa Zahrani, Director General of the Iranian Institute for political and International Studies also stressed the US influence on the political process, saying the “technicians”, who shape a general political approach “create a problem”, but do not try to solve it.

Although Zahrani remained negative about prospects of nuclear issue settlement, he noted that Iran fully welcomed and supported the agreements reached in Geneva.

“What was agreed in Geneva, it is absolutely the will and the wish of Iran,” the expert said.

The final round of talks between Iran’s and six world powers, the P5+1 Group, started in Vienna Tuesday. The parties have set a deadline for November 24 and made a commitment to find a solution before the deadline expires.

Iran’s uranium enrichment program sparked controversy as the West accused the country of a secret development of a nuclear weapon and imposed a range of sanctions against the Islamic Republic. Iran has consistently denied the accusations, claiming the uranium enrichment program is serving purely peaceful purposes and is designed to cover the country’s growing demand for energy.