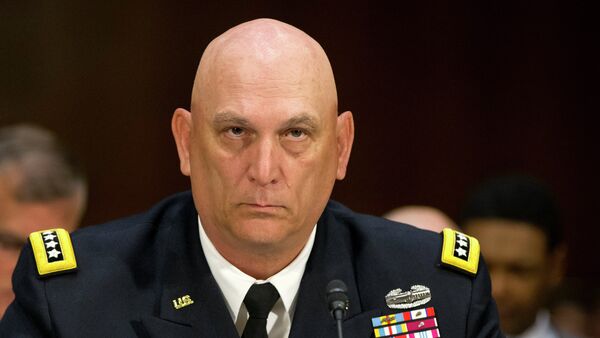 WASHINGTON, November 19 (Sputnik) — The US Congress needs to review military budget cuts amid security risks which are leaving the United States vulnerable, including the rise of Islamic State (IS) and the Ukrainian crisis, US Army General Ray Odierno stated Wednesday.

"It's about us [the US military] talking with Congress and others about understanding the risks associated with it [budget cuts to the military] and they have to reevaluate and review some of the decision they made," Odierno said at the Defense One Summit at the US Department of Defense (DOD).

In 2012, when the United States decreased the number of troops from 520,000 to 490,000, it did not intend to go back to Iraq and there was “not yet any threat of Russian aggression”, but "the world has changed a bit since we [the United States] made those decisions," Odierno added.

Gen. Odierno pointed out that last year the United States soon experienced budget cuts across all government departments which caused the DOD to make difficult budget decisions resulting in the military decreasing the number of US troops.

"When we made those initial decisions we believed that… the army's use would go down… well today, we are just about down to our final numbers in Afghanistan," Odierno said.

The general warned that if Congress did not reevaluate the country's military strategy, the United States would face many threats. "The world we face today is very different. It is incredibly complex… the solutions we have to come up with are more complex," Gen. Odierno noted.

In December 2013, US President Barack Obama and the Congress imposed spending cap on the military of $496 billion for the fiscal year of 2015, according to the DOD. Following this announcement, DOD Secretary Chuck Hagel introduced a proposal to shrink the number of troops from 490,000 to as low as 440,000 in response to the military's budget cuts.

The cuts, which followed the US sequestration budget cut period, will continue to decrease the military's budget for 2016 and beyond.