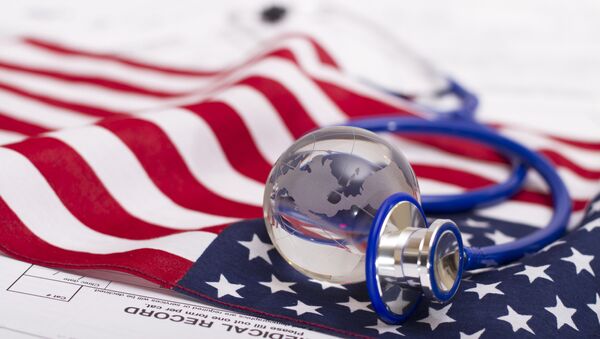 "Percentage of Americans who approve of the law represents a new numerical low, which could indicate a loss of faith in the law amid the aftermath of the 2014 midterms," the survey released on Monday read.

However, 37 percent of Americans say they approve the healthcare law, which is one percent less than what was reported back in January.

"Americans were slightly more positive than negative about the law around the time of the 2012 election, but they have consistently been more likely to disapprove than approve of the law in all surveys that have been conducted since then," the report added.

Gallup's survey follows a US Department of Health and Human Services (HHS) report that predicted last week that next year's enrollment for the ACA would be about three million enrollees less than previous estimates.

The HHS report said that from nine million to 9.9 million people would enroll for the ACA in 2015, while the Congressional Budget Office (CBO) estimated that number to be 13 million.

The Affordable Care Act was signed into law in March 2010 to provide universal healthcare to millions of uninsured Americans through an online healthcare marketplace that would offer affordable high quality insurance coverage.

Obamacare has been heavily disputed by the Obama administration and Republicans, who consider the ACA unconstitutional and a burden on the US economy. After winning over the House and Senate during the recent midterm elections, Republicans said they would repeal the ACA.