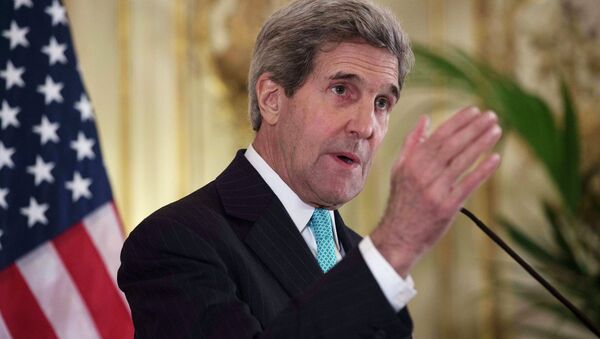 The US Secretary of State is expected to participate in the P5+1 and the European Union talks with Iran on its nuclear program, hold in Vienna, Austria on November 18-24.

WASHINGTON, November 18 (Sputnik) — US Secretary of State John Kerry is expected to visit the P5+1 and the European Union talks with Iran on Tehran's nuclear program, which are to be held in Vienna, Austria later this week, a US senior administration official said.

"I expect that he [Kerry] will [come to Vienna] at some point, probably not till later in the week," the official told reporters on Monday on the condition of anonymity.

Kerry will determine the length of his stay depending on how the negotiations evolve, according to the official.

"We [P5+1 group] have continued to make some progress in the course of these negotiations, but we still have gaps to close and we do not yet know if we will be able to do so," the official added.

Extension of negotiations on Tehran's nuclear program is not on the agenda, the official reiterated.

In November 2013, the P5+1 group of international mediators agreed to reach a deal with Iran guaranteeing the peaceful nature of its nuclear program by July 2014. The deadline for the agreement was later postponed to November 24, 2014.