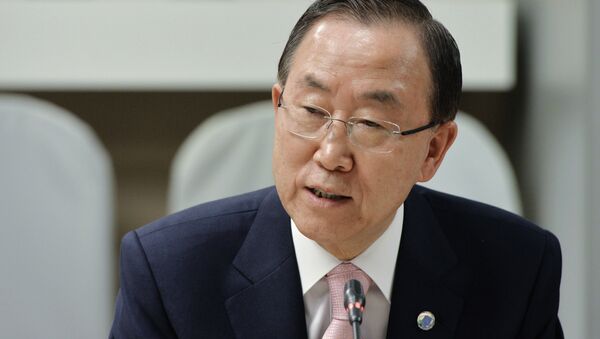 The United Nations Secretary General expressed his concern over the mass rape charges in North Darfur and blocking of additional investigation after the investigators were denied access to Thabit on Sunday.

"The Secretary-General therefore urges the Government of Sudan to grant UNAMID unfettered access, without further delay, to Thabit and its population so that these reports can be verified," UN said.

Earlier in November Sudanese media reported that the Sudanese Army troops, which have been rebelling against the Sudanese government as of 2003, raped 200 women and girls in October in Thabit, North Darfur after one of their fighters had gone missing. The army officials, however, denied media accusations, telling journalists that the village was "secure and calm."

The African Union-United Nations Hybrid Operation in Darfur (UNAMID) visited Thabit on November 9 and interviewed a variety of locals, including community leaders, school teachers and students and ordinary men and women.

After that visit, UNAMID issued a press release, stating that the village community leaders said "they coexist peacefully with local military authorities in the area." None of those interviewed confirmed that any incident of rape took place in Thabit on the day of the media report.

"The team neither found any evidence nor received any information regarding the media allegations during the period in question," the release said.

Ban Ki-moon said that "the heavy presence of military and police in Thabit made a conclusive investigation difficult."

United Nations Secretary General added that he is concerned that after intense consultations with the Government in the Sudan's capital of Khartoum and with authorities in Darfur, UNAMID was denied access to Thabit on Sunday. "Only a full investigation by UNAMID will help shed light over these serious allegations," he concluded.

"The Secretary-General is deeply troubled about persistent allegations of mass rape in Thabit, North Darfur. The African Union-United Nations Hybrid Operation in Darfur (UNAMID) visited Thabit on 9 November. However, the heavy presence of military and police in Thabit made a conclusive investigation difficult. UNAMID has since then attempted to gain further access to shed light on what happened," a statement issued Monday by the United Nations said.