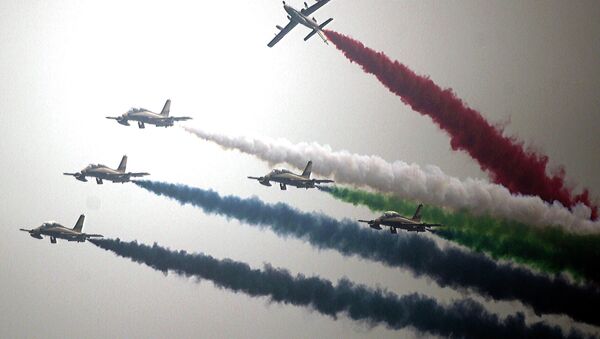 This year’s exhibition of aircraft again achieved record numbers of visitors and sales, while China gave a strong showing of technological prowess.

The show organizers reported “over 300 deals worth a record $23.4 bln,” according to Xinhua news agency, involving “sales of 227 aircraft of different types.”

First held in 1996, the China International Aviation and Aerospace Exhibition is a state-sponsored event which takes place in Zhuhai, Guangdong Province. Xinhua reports that over 700 aviation and aerospace manufacturers from 41 countries and regions were at this year’s show, which was attended by a record 410,000 people.

The highlight of this year’s exhibition was China’s unveiling of the Shenyang FC-31, its new stealth fighter jet. China revealed its new aircraft to the world while still in the early stages of development, an unprecedented move which US media interpreted as an intended show of strength. CNN and Time magazine noted that the timing of the plane’s debut coincided with that President Obama’s visit to Beijing for the APEC summit.

Other stars of the show were acrobatic performances from Chinese, Russian and UAE aviation teams. According to China Central Television, the Russian Knights aerobatic team conducted its demonstration with five Sukhoi Su-27 fighter jets, the only team to conduct an air show with twin-engine heavy fighters. CCT also reported that the UAE team impressed the audience with colored smoke and its spiral formation aerobatics.

China also displayed a series of impressive unmanned drones for both military and civilian use. Among the most notable was the Yilong, or Pterodactyl drone, which is one of only five such aircraft capable of performing both combat and reconnaissance missions, its design team told China’s Global Times. Another model, the Haihunzhe, also known as the Sea Patroller, “is only the third drone ever to land on a moving vehicle precisely,” said Dai Chuan, a deputy chief designer at Chengdu Aircraft Design Institute.

Another remarkable exhibit was a full-size prototype of China’s Mars rover. Scientists from the project told CCTV that they are working on the probe’s parachute and heat-proof structure in order to complete a successful Martian landing, which they plan to carry out by 2020.