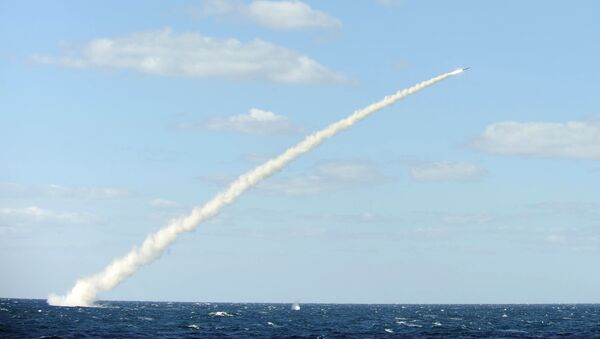 North Korea blasts US reports suggesting that Pyongyang’s submarines are equipped to launch ballistic missiles. While the US is talking up the threat posed by the DPRK’s military arsenal, South Korea has not officially confirmed the rumours of the submarines’ potential.

MOSCOW, November 15 (Sputnik), Ekaterina Blinova – North Korea has slated the US for spreading exaggerated stories on the capability of Pyongyang's submarines, suggesting that they are able to launch long-range missiles. These stories are being aimed at justifying an American military presence on the Korean Peninsula, suggests the Korean Central News Agency (KCNA), an official English-language media outlet of North Korea.

"These days the United States is working hard to build up public opinion on the DPRK's submarines capable of launching missiles through media… This is a crafty artifice of the US to justify the extension of the transfer of the wartime operation control (OPCON) to south Korea and deploy THAAD [Terminal High Altitude Area Defense] by calming down the opposition of the neighbouring countries under the pretext of "threat" from the DPRK [the Democratic People's Republic of Korea]," reports KCNA.

KCNA notes that the US has long planned to create a missile shield targeting "the big powers" in Asia-Pacific in order to dominate the region. According to the media outlet, the Pentagon is exploiting the pretext of DPRK's threat, while "working hard to deploy THAAD" in South Korea, boosting its military stronghold in Northeast Asia.

"Lurking behind the US scenario to bolster up its military muscle under the pretext of "coping with the threat" from the DPRK is a military adventure to ignite a war on the Korean Peninsula at any cost," the media outlet underscores.

"A review of commercial satellite imagery since 2010 covering submarine bases and submarine shipyards has identified a new test stand at the North’s Sinpo South Shipyard, probably intended to explore the possibility of launching ballistic missiles from submarines or of a shipboard vertical launch ballistic missile capability," the Washington Free Beacon wrote on October 28, citing Joseph S. Bermudez Jr., a North Korea expert with AllSource Analysis, Inc.
The US media website also stressed that the commander of US forces in Korea said he "believes" that Pyongyang could make a nuclear warhead for its missiles.

Yonhap suggests that KCNA's statement could also be triggered by South Korean Defense Minister Han Min-koo's warnings about North Korea's attempts to bolster its military strength. However, Han admitted he could not confirm officially that North Korea was developing a ballistic missile submarine.