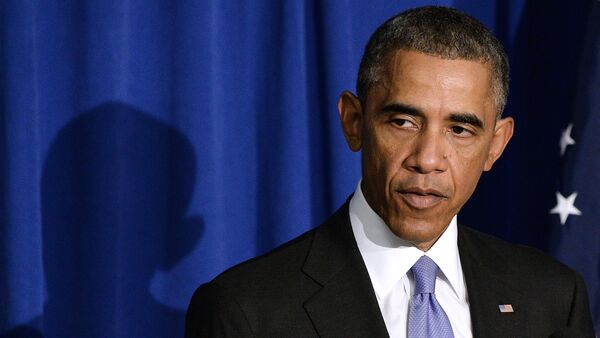 © Fotobank.ru/Getty Images / Olivier Douliery-Pool
Subscribe
US President Barack Obama is not sure about successfully concluding negotiations with Iran over its nuclear ambitions and consequently clearing sanctions against it, pointing out that the US-led fight against the IS is not connected to nuclear negotiations with Iran.

WASHINGTON, November 9 (RIA Novosti) — US President Barack Obama is not confident about successfully concluding negotiations with Iran over its nuclear ambitions and consequently clearing sanctions against it, according to an interview to CBS on Sunday.

“They have abided by freezing their program, and in fact reducing their stockpile of nuclear grade material, and the question now is, are we going to be able to close this final gap,” Obama said while speaking at the interview.

“There is still a big gap, we may not be able to get there,” Obama added, in regards to concluding negotiations for sanctions to be cleared against Iran and for it to “reenter the international community.”

Obama also emphasized while speaking to CBS, that the US-led fight against the Islamic State (IS) militant group, which is taking over territories of Iraq and Syria, is not connected to nuclear negotiations with Iran, despite its strategic position in the issue.

“Iran has influence over Shia [Muslims] both in Syria and in Iraq, and we do have a shared enemy in ISIL [IS], but I have been very clear publicly and privately, we are not connecting in anyway, the nuclear negotiations from the issue of ISIL,” Obama said.

The P5+1 Group, which conducts negotiations with Iran over its nuclear ambitions is currently in the process of holding talks scheduled to run to November 24.

The United States, Russia, France, China, Britain and Germany want Iran to maintain low thousands of enrichment centrifuges. Iran now has about 19,000 installed with about 10,000 spinning to refine uranium.