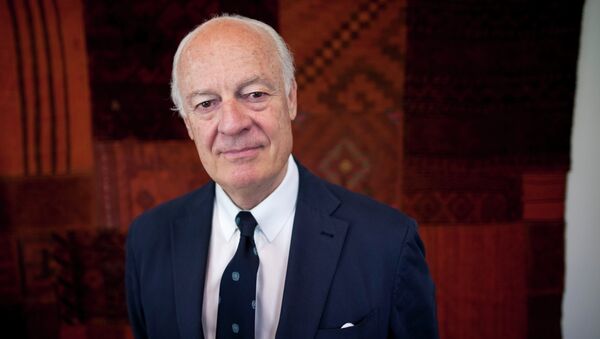 MOSCOW, November 9 (RIA Novosti) — The United Nations peace envoy for Syria met officials in Damascus Sunday on plans to suspend fighting between the government and Islamic State (IS) militants, as well as other rebel groups, in the northern areas of the country, the Middle East Online reported.

During his last visit to Syria in October, Mistura presented a proposal to freeze fighting in local areas to allow for aid delivery and facilitate peace talks.

The Syrian government has been fighting opposition from the IS since 2012. On Saturday night onto Sunday, at least 21 people were killed and more than 100 injured, including children and women by barrels bombardment on the northern Al-Bab city which is taken over by the IS, the Syrian Observatory for Human Rights Reported.

In an attempt to impede the military advancement of the IS group, the United States launched airstrikes against the jihadists' positions in Iraq and Syria in mid-September, with some other countries such as France, the United Kingdom and Australia joining later.

Syria's civil war has claimed more than 200,000 lives over the past almost four years, according to the Syrian Observatory.