Russia Should Be Sanctioned More if Ukraine ‘Reinvasion’ Confirmed: Senator 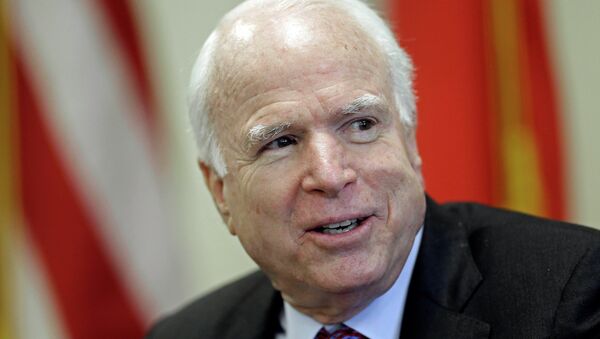 US Senator John McCain asserted that United States and the European Union should sanction Russia further if reports of Russia's alleged incursion into Ukraine are confirmed.

WASHINGTON, November 8 (RIA Novosti) – The United States and the European Union should introduce more sanctions against Russia and supply lethal weapons to Kiev, if reports of Russia's alleged incursion into Ukraine are confirmed, US Senator John McCain has said.

"If confirmed, today's reported Russian reinvasion of Ukraine should lead to an immediate escalation of US and EU sanctions. More importantly, we must also provide our Ukrainian partners with the military capabilities," McCain said Friday.

Earlier on Friday, US State Department spokesperson Jen Psaki told reporters that Washington does not have independent confirmation of Kiev's claims that Russian tanks and artillery have allegedly crossed the Ukrainian border.

Since the beginning of the military conflict in eastern Ukraine in April, Kiev and the West have repeatedly accused Russia of intervening in the Ukrainian crisis, going as far as to claim that Moscow has sent troops and weapons to independence supporters in the Donetsk and Luhansk regions. However, the United States and its partners have never supported their accusations with any evidence.

Over the past few months, the United States and its allies have introduced several rounds of sanctions against Russia, over its alleged meddling in Ukraine's internal affairs. Moscow has repeatedly denied these allegations, stressing that sanctions are counterproductive, cause harm to the countries using the measure and threaten international stability.