All Texas Healthcare Workers to Be Cleared From Ebola Monitoring Friday 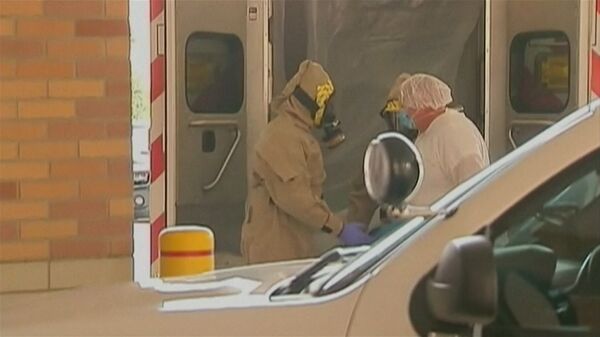 © RIA Novosti
Subscribe
A release from the Texas Health Presbyterian Hospital said that all Texas healthcare workers to be cleared from Ebola monitoring friday evening as the incubation period ends.

WASHINGTON, November 7 (RIA Novosti) – The last healthcare worker undergoing Ebola monitoring after being potentially exposed to patients who contracted the virus in Texas will be cleared Friday evening as the incubation period ends, a release from the Texas Health Presbyterian Hospital said.

An additional 177 healthcare professionals, household contacts and community members were also "monitored over time because they had contact with at least one of the three Texas Ebola patients, specimens or medical waste," the release said.

"We are happy to reach this milestone, but our guard stays up," commissioner of the Texas Department of State Health Services Dr. David Lakey said. "We reached this point through teamwork and meticulous monitoring, and we'll continue to be vigilant to protect Texas from Ebola," he added.

Texas has also cleared the passengers who were on the same flight with former Ebola patient, nurse Amber Vincent, who travelled between Dallas, Texas and Cleveland, Ohio a day before she tested positive for the disease in October.

The Presbyterian hospital officials confirmed that there have not been any other cases of Ebola registered in Texas, but that the state is still monitoring a local nurse who is considered to be at "some risk" after having recently returned from Sierra Leone after providing care services to Ebola-sick patients.

In September, a Liberian native Thomas Eric Duncan was the first person to test positive for Ebola in Texas. Duncan later spread the disease to two other healthcare workers who were taking care of him. Duncan died at the hospital on October 8.

Several US states, including Illinois, New York and New Jersey, have implemented mandatory active monitoring programs for both travelers and healthcare workers returning from Ebola-hit countries. Pentagon also issued a mandatory quarantine on healthcare workers who were taking care of Ebola patients as well as on US troops who are coming back from Ebola response missions.

The Ebola virus is transmitted through direct contact with the bodily fluids of those infected. Although there is no officially approved medication for the disease, several countries are currently working on Ebola vaccines.

The Ebola outbreak began in Guinea in February and soon spread to Liberia, Sierra Leone, Nigeria and Senegal. However, Senegal and Nigeria have recently been declared free of Ebola by the World Health Organization (WHO). Several cases of the disease have also been registered outside of West Africa.

According to the latest estimates by the WHO, there have been more than 13,000 reported Ebola cases, with 4,818 having been killed by the virus. The majority of lethal cases have been registered in the three western African countries — Guinea, Liberia and Sierra Leone.