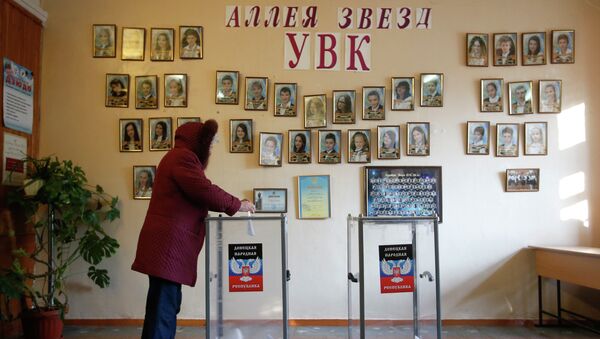 © REUTERS / Maxim Zmeyev
Subscribe
According to a political science professor at the University of Prince Edward Island (UPEI), the US and the EU have recognized less free and fair elections than those in self-proclaimed Donetsk and Luhansk People's Republics, because they refuse to accept the unconstitutional coup in Ukraine last February.

"Legitimacy [of the elections] is in the eye of the beholder. The United States and the EU have recognized all kinds of elections around the world, which were of dubious legality, and which were clearly less than free and fair," Srebrnik said, adding that recent presidential elections in Afghanistan and Egypt can serve as examples.

"Since Washington refuses to accept the fact that there was an unconstitutional regime change in Ukraine last February, it won't accept any election result in eastern Ukraine, even if it completely reflects the wishes of the population there," he explained.

Professor called the elections legitimate and noted that the voters' turnout was at least 70 percent, which is some 20 percent higher than the percentage of population that came to the recent Ukrainian election.

On Sunday, the self-proclaimed Donetsk and Luhansk people's republics held elections of the heads of the local governments and representatives of the legislative bodies. Some 100 international observers monitored the elections.

While Russia has expressed its respect for the people's will in the two regions, the European Union and the United States have stated they would not recognize the elections as legitimate as they violate the Minsk agreements.

The current prime minister of the self-proclaimed Donetsk People's Republic, Alexander Zakharchenko, is leading with 81 percent, according to the latest exit polls. Luhank's current chief is leading in the elections there with 63.17 percent, the republic's Central Election Commission has announced.