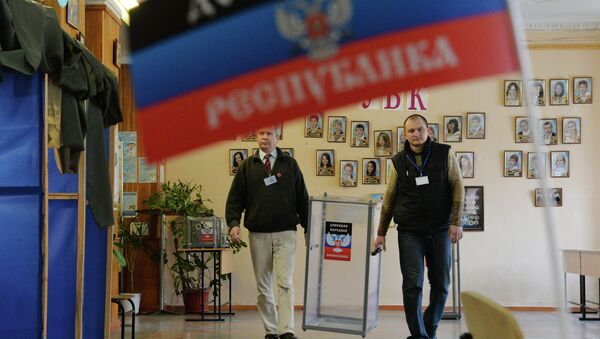 © Sputnik / Alexey Kudenko
/
Go to the photo bank
Subscribe
The US National Security Council has declared that US will not recognize the results of the elections, held in the self-proclaimed people's republics of Donetsk and Luhansk (DPR and LPR)and call them illegitimate, urging all members of the international community to follow their example.

WASHINGTON, November 3 (RIA Novosti) – The United States will not recognize the results of the elections, held in the self-proclaimed people's republics of Donetsk and Luhansk (DPR and LPR), Mark Stroh, a spokesperson for the US National Security Council, has told RIA Novosti.

"We condemn the illegitimate, so-called local 'elections', conducted today by separatists in parts of eastern Ukraine. The holding of these 'elections' contravenes Ukraine's constitution and laws, and the September 5 Minsk Protocol," Stroh said Sunday.

"The United States will not recognize any results, announced from this so-called 'election,' and we call on all members of the international community to do the same," Stroh added.

According to the spokesperson, the only legitimate election in eastern Ukraine will be held on December 7, as prescribed by the law granting special status to parts of Donetsk and Luhansk regions. The law was signed by Ukrainian President Petro Poroshenko on October 16. However, DPR and LPR authorities did not follow Kiev's plans and slated their elections for November.

On Sunday, DPR and LPR residents went to the polls to vote for heads of local governments and representatives of local legislative bodies. The elections were monitored by observers from a number of European countries and the United States.

EU and US authorities announced earlier that the elections would not be in line with the Minsk agreements on the regulation of the Ukrainian crisis. Russia, on the contrary, has expressed its intention to recognize the elections and emphasized that condemning them would undermine efforts to reach a peace settlement in Ukraine.