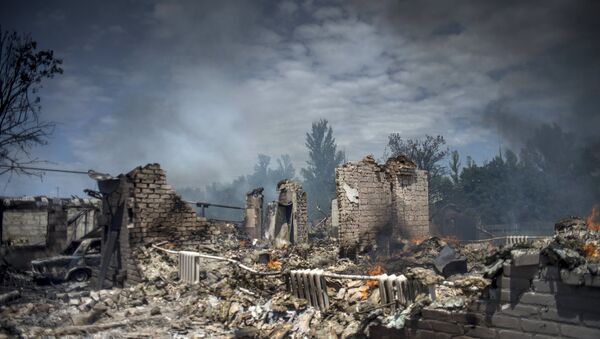 The representatives of the self-proclaimed republics in Ukraine's southeast said in a statement that the law on Donbas special status is legally insignificant.

MOSCOW, October 30 (RIA Novosti) – Legislation passed by Kiev on the status of eastern Ukraine does not work and is legally insignificant, a statement issued by representatives from the Donetsk and Luhansk people's republics said.

“Article 1 of the legislation shows a list of regions, which are to receive special status, and is confirmed by ‘a Verkhovna Rada decision.’ This decision was not accepted, so the law does not work and is legally insignificant,” the statement reads.

Following a February coup in Kiev, residents of the Donetsk and Luhansk regions in eastern Ukraine established so-called people's republics and later declared independence. The crisis escalated in mid-April, when Kiev authorities launched a military operation against independence supporters in the regions.

After a breakthrough meeting of the trilateral Contact Group on Ukraine on September 5, which resulted in the establishment of a ceasefire in the volatile regions, Ukraine adopted a law granting special status to parts of the Donetsk and Luhansk provinces.

On Wednesday, Deputy Prime Minister of the self-proclaimed Donetsk People's Republic Andrei Purgin said that the law on the special status theoretically exists but it does not specify the exact territories that were granted increased powers.