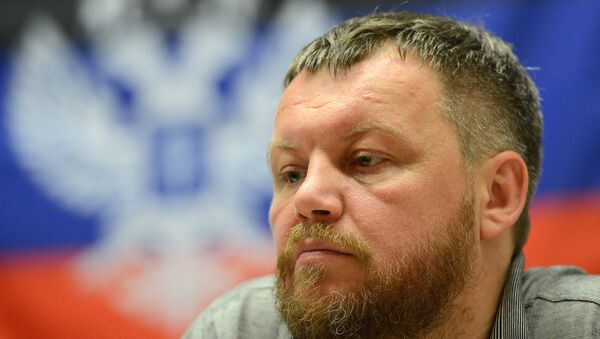 Deputy prime minister of the self-proclaimed Donetsk People’s Republic Andrei Purgin said that Kiev had taken back the delineation agreement between Ukrainian and Donetsk forces.

DONETSK, October 29 (RIA Novosti) – Kiev has withdrawn from the delineation agreement it signed with Donetsk authorities without any explanation, the deputy prime minister of the self-proclaimed Donetsk People's Republic (DPR) said Wednesday.

"A delineation was agreed between the opposing forces, but Kiev recalled the signature of its representative, Gen. Dumanskiy, from the document without giving any reason," Andrei Purgin told reporters.

The delineation is a key condition laid down in the ceasefire agreement between Kiev and the independence supporters. It should serve as a preparatory stage for the withdrawal of heavy weaponry from both sides that will contribute to stabilizing the relations between them.

In September, the ceasefire agreement in southeastern Ukraine was reached during the meeting of the Contact Group on Ukraine. It was agreed that a 30-kilometer (19-mile) buffer zone separating Kiev forces and independence supporters of the self-proclaimed Donetsk and Luhansk people's republics (DPR and LPR) would be created.

DPR Prime Minister Alexander Zakharchenko stated on October 11 that the delineation agreement between the independence supporters and Kiev had been signed. The official said the delineation would reflect the line of contact between the two opposing sides as of September 19.