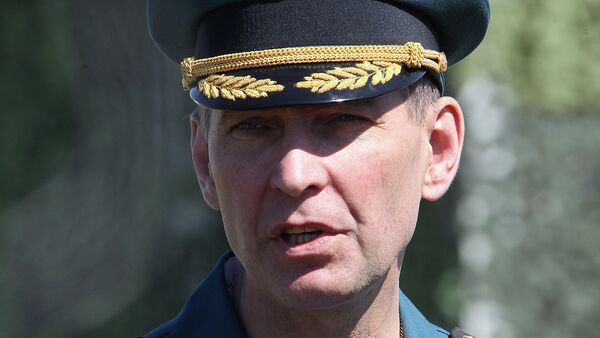 Russian Deputy Emergencies Minister Vladimir Stepanov expects convoy, carrying 1,000 metric tons of humanitarian aid, to arrive in the Rostov region tomorrow evening and from there proceed to Donetsk and Luhansk.

"We expect that tomorrow evening the convoy will arrive in the Rostov region," Stepanov said, adding that from there the trucks, carrying 1,000 metric tons of humanitarian aid, will go to Donetsk and Luhansk.

"Winter is coming, it will be difficult for them [the people of Donetsk and Luhansk] to survive," Stepanov stressed.

The minister specified that Russian deliveries of humanitarian aid to Ukraine are being carried out in coordination with the Red Cross and the Russian Foreign Ministry.

Earlier on Tuesday, Russia's Emergencies Ministry announced it would send another humanitarian aid convoy of up to 50 trucks to Ukraine later in the day. Nevertheless, Ukrainian National Security and Defense Council spokesman Andriy Lysenko said that the council had no official information about the convoy.

In April, Kiev forces started military operation against independence supporters in eastern Ukraine, which has claimed the lives of over 3,700 people. On September 5, the conflicting sides reached a ceasefire agreement at a Contact Group meeting in Minsk.

Due to the conflict, Ukraine's southeastern regions are mired in a severe humanitarian catastrophe, as many citizens are struggling without clean water, electricity and other essentials.