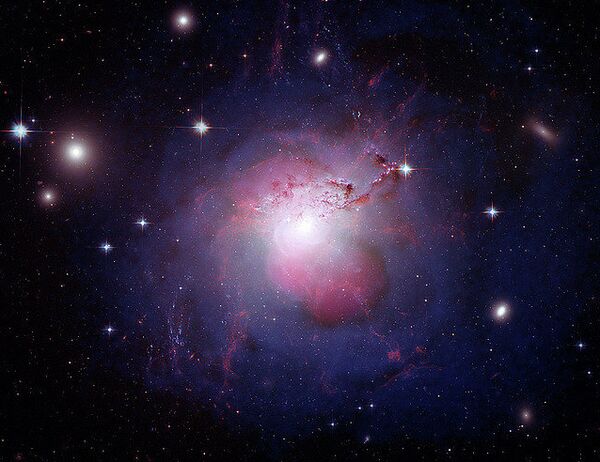 Researchers at Johns Hopkins University in Baltimore, Maryland, have questioned why aging galaxies stop forming new stars at some point, and found out it could be because of massive black holes which block the formation of new stars by spewing out radio-frequency-emitting particles at near-light speed.

MOSCOW, October 26 (RIA Novosti) – Researchers at Johns Hopkins University in Baltimore, Maryland say they have obtained “crucial new evidence” that it is “these jets of radio-frequency feedback streaming from mature galaxies' central black holes that prevent hot free gas from cooling and collapsing into baby stars.”

"When you look into the past history of the universe, you see these galaxies building stars," US scientific website Science Daily quotes Tobias Marriage, assistant professor of physics and astronomy at Johns Hopkins and co-lead author of the study as saying. "At some point, they stop forming stars and the question is: Why? Basically, these active black holes give a reason for why stars stop forming in the universe."

The study has been published in the Monthly Notices of the Royal Astronomical Society journal.

The main point of the research is that in space, hot gas drawn into a galaxy can cool and condense, forming stars. Some gas also funnels down into the black holes which are often found in the centers of galaxies, which grow together with the number of stars. This cycle can repeat continuously; more gas is pulled in to cool and condense, more stars begin to shine and the central black hole grows more massive.

But in nearly all mature galaxies -- the big galaxies called "elliptical" because of their shape -- that gas doesn't cool any more.

"If gas is kept hot, it can't collapse," Marriage says. When that happens, no new stars can be formed.

The scientists found that the elliptical galaxies with radio-frequency feedback -- relativistic radio-frequency-emitting particles shooting from the massive black holes at their center at close to the speed of light -- all contain hot gas and a dearth of infant stars.

That provides crucial evidence for their hypothesis that this radio-frequency feedback is the "off switch" for star-making in mature galaxies.

The researchers however say it still remains unknown why black holes in mature elliptical galaxies begin to emit radio-frequency feedback.