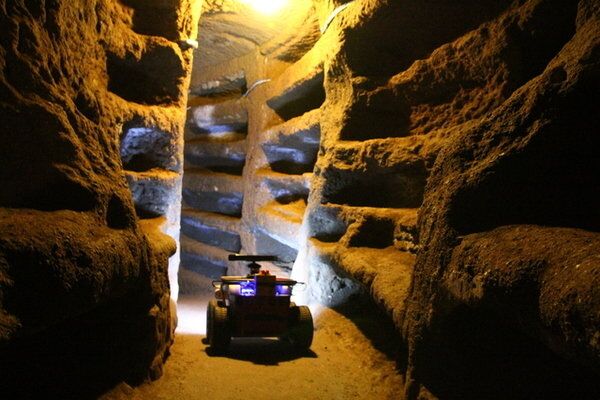 © rovina-project.eu
Subscribe
The collective effort of several European universities, mainly from Germany, Belgium and Italy, has been revealed recently as a sci-fi device come true: the robotic archaeologist, which is capable of exploring and excavating archaeological sites on its own and building comprehensive models of the environment based on the data it receives.

MOSCOW, October 18 (RIA Novosti) – The collective effort of several European universities, mainly from Germany, Belgium and Italy, has been revealed recently as a sci-fi device come true: the robotic archaeologist, which is capable of exploring and excavating archaeological sites on its own and building comprehensive models of the environment based on the data it receives.

The EU-funded Rovina Project is being carried out by the Rome-based tech company Algorithmica, in partnership with several leading European research centers. The ultimate goal of the “Robot Archaeologist” project is to make the process of discovering, evaluating and researching historical artefacts faster, more affordably and safely, sparing both human researchers and the objects of their study. The robot, which is still in the works, will be able to make a 3D reconstruction of historical places, including dangerous sites, while working completely autonomously.

“Today it’s possible to build robots that will automatically explore archaeological sites and build extremely accurate models of them. Sometimes, it’s also possible to obtain inferences from the model, in order to diagnose  how to preserve these very same sites”, Vittorio Ziparo of Algorithmica says.

The idea for the Rovina Project first emerged four years ago: to use robots to explore the mysterious albeit dangerous Roman catacombs. However, it was not before 2013 that the project actually started. Three Robot Archaeologist prototypes have already been produced, and they will be tested in the catacombs of Rome and Naples, according to Forbes.

Human explorers are often anxious about entering these catacombs as their shaky walls and galleries are prone to collapse and contain hazardous amounts of radon gas, which causes lung cancer in humans who have been exposed to it for longer than half an hour. Thus, these places, despite having an extremely high historical significance still remain largely unexplored.

The robotic archaeological device is a remotely-controlled probe that can carry up to 50 kg of weight, climb slopes, autonomously navigate and digitally reconstruct the site it explores. The probe carries cameras, 3D laser scanners and the XSens navigation unit, which combines gyroscopes, accelerometers and a magnetometer. The robot has already been tested in the Catacomb of Priscilla in Rome with success, Forbes says.

The developers say their next step is to mount a sort of artificial intelligence module on the robot. As a result, the robotic archaeologist will be able to optimize its own work and find more interesting artifacts.

However, these miracle machines will see only limited use in order to prevent human archaeologists from being hurt. “While these research prototypes provide great support for archeologists, they aren’t really able to substitute them. These machines will instead handle the risky parts, their best field being the application of the so-called DDD (Dangerous, Dirty and Dull) jobs.” Ziparo says. The main consideration here is that even a perfectly good AI can’t yet replace an analytical human mind.