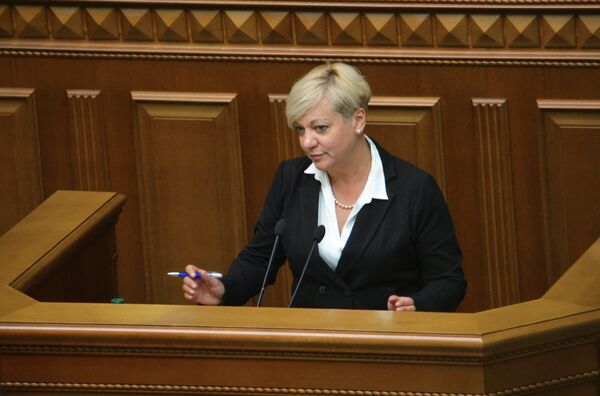 © RIA Novosti . Evgeny Kotenko
/
Go to the mediabank
Subscribe
International
India
Africa
Ukraine has reserved $3.1 billion on a special account as part of payment for its total gas debt to Russia, the nation's central bank chief said in an interview Wednesday.

MOSCOW, October 15 (RIA Novosti) - Ukraine has reserved $3.1 billion on a special account as part of payment for its total gas debt to Russia, the nation's central bank chief said in an interview Wednesday.

"The account was opened back in July, and the money to settle the debt with Gazprom has long been transferred to that account, pending either a ruling by the Arbitration Institute of the Stockholm [Chamber of Commerce] or an agreement [between Russia and Ukraine]," said Valeria Hontareva, who has recently been appointed the head of the National Bank of Ukraine.

During a ministerial gas meeting in Berlin on September 26, Moscow and the European Commission proposed the so-called winter package, the deal that would seek Ukraine to pay $3.1 billion of its debt to Russia by the end of the year in exchange for gas deliveries during winter months at $385 per 1,000 cubic meters.

Russia initially insisted that Ukraine would pay the first tranche of $2 billion before the start of the deliveries. Later, however, Russia proposed a more flexible schedule for the debt repayment under which Kiev should pay $1.45 billion in the first installment, with the rest of the debt to be cleared by the year-end.

Ukrainian Energy Minister Yuriy Prodan said Ukraine was not willing to make any advanced payment for Russian gas supplies and insisted that payments be made upon delivery.

The bitter standoff between Russia's energy giant Gazprom and Ukraine's Naftogaz reached the Stockholm arbitration court in summer, with Gazprom demanding that Ukraine pay off its outstanding gas debt after it climbed to a whopping $4.5 billion in July.

Yuriy Vitrenko, a senior board member at Naftogaz, said Tuesday the company had filed a request with the Stockholm court asking to revise the 2009 transit contract with Gazprom, despite Russian Energy Minister Alexander Novak saying previously Moscow was not going to do so.

The Russian Energy Ministry said Monday the next round of Russia-Ukraine-EU gas talks was scheduled for October 21.