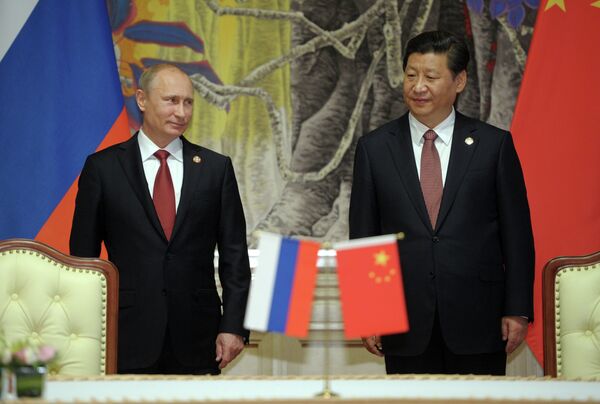 © RIA Novosti . Aleksey Druzhinin
/
Go to the photo bank
Subscribe
Russian President Vladimir Putin’s visit to China in May 2014 marked the beginning of several major investment projects and the launch of a number of cooperation agreements between the two countries.

MOSCOW, October 14 (RIA Novosti) - Russian President Vladimir Putin’s visit to China in May 2014 marked the beginning of several major investment projects and the launch of a number of cooperation agreements between the two countries.

In October 2014, some 40 agreements on energy, banking, transport, agriculture, space technology and telecommunications were signed during Chinese Premier Li Keqiang’s visit to Moscow.

In May 2014, during Vladimir Putin’s visit to China, the two countries signed their biggest gas contract ever, with Gazprom agreeing to supply 38 billion cubic meters of gas per year for the next 30 years. The contract is worth a total of roughly $400 billion.

The total amount to be delivered over the agreed period would exceed more than 1 trillion cubic meters. Investments in gas extraction and transportation infrastructure in Russia alone will be worth $55 billion.

Russian state Corporation Rosatom is currently in talks with the Chinese side over the construction of nuclear power units on the mainland. In addition, during Russian President Vladimir Putin’s visit to China, a memorandum of understanding was signed between Russia and China on the possible construction of floating nuclear power plants.

Russia's largest independent gas producer Novatek has signed a contract with China's CNPC to supply 3 million tons of LNG (liquefied natural gas) per year for 20 years as part of the Yamal LNG project. The price of LNG will be determined by a formula, linked to the JCC oil index. Vnesheconombank, Gazprombank, Yamal LNG and the China Development Bank signed a memorandum on organizing project financing. According to the document, the parties will endeavor to launch project financing in the fourth quarter of 2014 on the most favorable terms.

Russia and China have also decided to establish a joint venture for the production of LNG.

The Chairman of Rosneft, Igor Sechin and CNPC Deputy Chairman Wang Dongjin signed an agreement to launch an oil refinery in Tianjin, China in late 2019. Rosneft will be the sole supplier for the refinery. The plant's capacity will be 16 million tons. Investments in the construction were previously estimated at about $5 billion. In the second phase, a chain of gas stations will be established in China, operating under the name of Rosneft and CNPC.

Rosneft and CNPC signed an agreement in October on strategic cooperation. Rosneft and ExxonMobil intend to implement the Far East LNG project, which is planned to be included in the Sakhalin-1 project. Gas supply to the plant is planned to be from the Sakhalin-1 – North Chaivo and North Veninsky fields. The total resource base is 584.4 billion cubic meters of gas. Based on proven reserves, the design capacity of the first stage of the LNG plant has been defined as 5 million tons per year. The plant’s first production line is scheduled to be launched in 2018-2019.

The RusHydro energy holding company signed a strategic cooperation agreement in May with the Chinese company PowerChina. Under the agreement, the company will consider the possibility of PowerChina participation in a program to develop RusHydro small hydropower. One of the formats of cooperation could be a joint venture, and the parties agreed to consider establishing one. RusHydro subsidiary of RAO Energeticheskiye Systemy Vostoka (Energy Systems of the East) signed an agreement with Dongfang Electric International Corporation on cooperation on the implementation of joint projects in the Russian Far East.

OAO Rossiiskiye Seti (Russian Grids) and State Grid Corporation of China signed an agreement on strategic cooperation in May. The parties plan to focus on exploring the possibility of the construction of Euro-Asian energy bridge and set up the delivery of electricity from Russia to China. For this purpose, energy companies have agreed to jointly explore the possibility of building ultrahigh voltage AC and DC transmission lines, as well as underground EHV substations in the Russian Federation.

A working group has been formed to organize the joint venture (JV) for the implementation of projects to modernize and construct transmission facilities in both Russia and other countries.

Russian Railways and the Chinese state railway operator China Railway Corporation have agreed on strategic cooperation in the development of infrastructure and operations. The companies plan to develop rail border crossings and rail infrastructure on border approaches to increase the capacity of the railways, as well as increasing the volume of international traffic between the countries and transit through their territories.

In addition, both parties intend to optimize the conditions and technology of container traffic, including the organization of regular container trains.

The Russian government signed a memorandum of cooperation on a high-speed railroad in October 2014 between the Russian Transport Ministry, Russian Railways, the State Committee of China's state development and reform committee and the China Railway Corporation. The purpose of the document is to develop a Moscow-Beijing Eurasian high-speed rail transport corridor, including the priority project of a Moscow-Kazan high-speed rail line.

The total cost of the Moscow-Kazan high-speed rail project is estimated at 1.068 trillion rubles (approximately $26.2 billion).

On October 14th, Mikhail Pogosyan, president of the United Aircraft Corporation (UAC), and Jin Tianlun, chairman of the Chinese corporation COMAC signed a memorandum on cooperation on a long-term program of long-range wide-body passenger aircraft.

According to Pogosyan, the new aircraft can take up to 10% of the world market for wide-body long-haul aircraft. The project will require roughly $10 billion in investments.

Chinese automaker Chery Automobile announced the start of production of its cars in Russia in July with up to 30,000 units per year at the Derveis plant in Karachay-Cherkessia. The company has invested several tens of millions of dollars in the project – the money was allocated for the purchase of welding equipment. Production should reach full capacity in about a year and a half. The company also intends to set up a Research and Development center in Russia, which in the first stage will be to adapt models for the local market.

China's largest SUV maker Great Wall Motors (GWM) started construction of a $500 million car plant in the Tula Region with output of up to 150,000 vehicles per year. GWM will set up the full cycle of production of Hover brand in the region, including the manufacture of engines and transmissions. The plant opening is scheduled for 2017. Full completion of the project is planned in 2020.

VTB, VEB and the Russian Agricultural Bank, which were targeted by Western sanctions, reported a number of agreements in October with the Export-Import Bank of China (Eximbank) amounting to at least $ 4billion. In particular, the second largest Russian bank, VTB, reported that China Exim Bank will provide it with a line of credit in yuan or the ruble equivalent of up to $2 billion to finance the import of a wide range of products from China, ranging from food products and ending with high-tech equipment. China Exim Bank will provide a credit line of $2 billion for projects in the Far East and Siberia. The Russian Agricultural Bank, in turn, signed an agreement with China Exim Bank to provide trade finance. In addition, Russian Standard Bank, which is among the top 30 Russian banks, has begun issuing bank cards using the Chinese payment system UnionPay.

The Central Banks of Russia and China signed a three-year agreement on exchange operations (currency swap) of 150 billion yuan (approximately $24.5 billion). According to the Russian regulator, the agreement will promote the development of bilateral economic relations and the greater use of rubles and yuan in trade and investment.

Russian defense companies are negotiating to supply China with S-400 anti-aircraft missile systems and manufacturing the heavy Mi-26 helicopter, with a carrying capacity of up to 15 tons, in China.