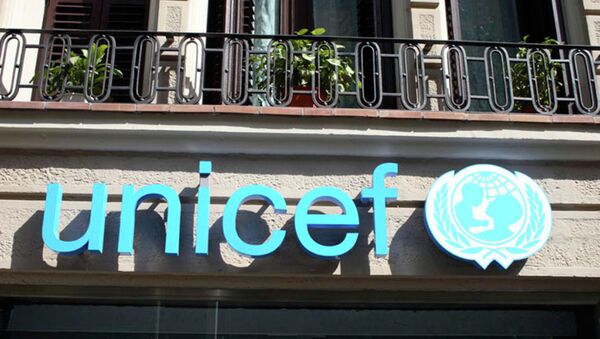 “This award will be an inspiration to all the millions of unnamed and unknown children around the world who battle silently in their own lives for the right to an education and the right to be heard and protected. The courage of Malala and Kailash is a rallying cry for the cause of children, everywhere," the organization said.

"UNICEF is delighted that Malala Yousafzai and Kailash Satyarthi, two powerful advocates for children’s rights, have been awarded the Nobel Peace Prize," the statement said.

The organization noted that the timing of well-deserved honor for two brave and determined champions for children could not be more appropriate, as this is the year the international community celebrates the 25th anniversary of the Convention on the Rights of the Child.

Earlier in the day, Satyarthi and Yousafzai were jointly awarded this year's Nobel Peace Prize "for their struggle against the suppression of children and young people and for the right of all children to education." 17-year-old Yousafzai has become the youngest Nobel Peace Prize laureate in history.

At the age of 12, Yousafzai started writing about her life in a BBC blog, describing horrifying living conditions under the rule of Taliban forces, known for their brutal treatment of women and campaign against female education. Two years ago Malala was shot in the head by the Taliban on her way home from school. The activist survived the attack and continued with her fight for human rights, bringing the issue of education for girls into the global spotlight.

Kailash Satyarthi, 60, is an Indian children's right advocate. He has been active in the Indian movement against child labor since the 1990s and initiated an annual global march against the practice.