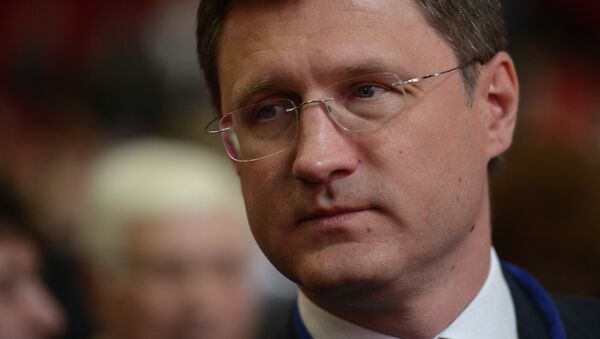 The three-party gas protocol of Russia, Ukraine and the European Union is ready and Moscow is currently waiting for Kiev to answer, Russian Energy Minister Alexander Novak said Monday.

“A draft protocol to be signed by the three sides – Russia, the European Union and Ukraine – has been prepared. Currently, our joint proposal with the European Commission is being considered by the Ukrainian side. We are waiting for their answer,” the minister said.

The minister said that the three-way talks resumed on September 26, after a nearly three-month break, with an aim to resume gas deliveries to Ukraine and determine the mechanism of how the accumulated debt will be restructured and what funds will be used to repay it.

“We view the situation as difficult and the European Commission shares our concerns,” Novak said, adding that “without the resumption of supplies from Russia, the present amount of gas stored in Ukraine’s underground storage facilities is not enough for the cold season.”

Earlier on Monday, Ukrainian Energy Minister Yuriy Prodan said that Russia, Ukraine and the European Union may hold another round of gas talks next week.

Both sides have spent the last few days negotiating the date of the next meeting, as Kiev is unhappy with the winter package proposed by Moscow and the European Commission during a ministerial gas meeting late September in Berlin.

Kiev does not agree with Russia's offer of a $100 discount to the price for 1,000 cubic meters in the form of an export-duty exemption and wants the contract price to be reduced instead.

Ukraine also wants to agree the debt repayment schedule, as well as terms and schedules of future gas deliveries and insists on amending the current gas contract with Russia in order to formally authorize reverse deliveries of Russian gas to Ukraine from Europe.

In June, Russia's gas giant Gazprom was forced to introduce a prepayment system for gas deliveries to Ukraine due to Kiev's massive debt which is currently estimated at $5.3 billion.