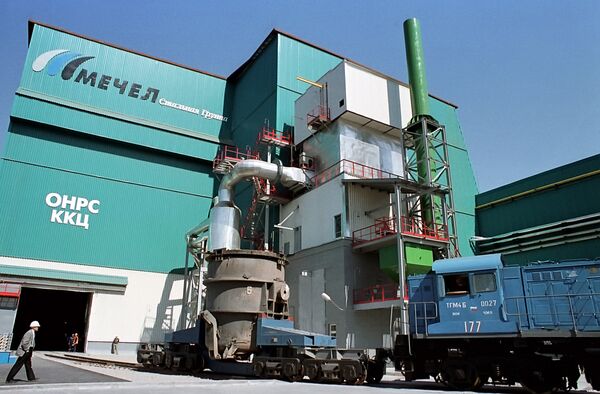 © RIA Novosti . Merkuriy Golodnov
Subscribe
Stocks of Russian mining company Mechel have sunk by 30 percent in the past nine months as the company has unsuccessfully tried to restructure its debt, reports Bloomberg.

MOSCOW, September 23 (RIA Novosti) - Stocks of Russian mining company Mechel have sunk by 30 percent in the past nine months as the company has unsuccessfully tried to restructure its debt, reports Bloomberg.

The stock’s recent tumble, however, stemmed from two recent events.

First, remarks made by Russia’s Economy Minister Alexei Ulyukayev on September 20. He said “if the company is bankrupt, we should legally acknowledge it” and adding that he sees “no way out,” according to Bloomberg.

Second, the company has refused to convert part of its debt into shares. The company’s refusal to convert its debt into stock has prompted VTB to publically announce that it would take legal action to reclaim its debt. "Unfortunately we have no other option but to take legal action by filing a claim, because the plan suggested by Mechel does not suit us," said VTB's Chief Executive Andrei Kostin. It debts total $8.7 billion according to Bloomberg. Mechel is expected to lost $591 million by the end of the year.

VTB had proposed to Mechel an trade of $3 Billion of its debt for 75 percent of its equity, Mechel Chief Financial Officer Andrei Slivchenko wrote in an email. According to the WSJ, this would reduce the shareholding of Mechel’s founder, Igor Zyuzin, from 67 percent to 10 percent.
Mechel has rejected this plan in favor of selling part of its assets.

In a recent meeting, Russian President Valdimir Putin said that “the borrowers”, in reference to Mechel but not explicitly stating their name, must themselves must be responsible for their own debt and not expect the government to intervene. "They all should understand and keep it in mind that, according to the market law, they will have to deal themselves with all the issues that arise not because of some political events, but due to their own business and financial activities. They should never forget about that," Putin said in a meeting with Kostin.

Deputy Prime Minister Arkady Dvorkovich has insisted on a policy of non-intervention. He stated that he believes the banks and Mechel can work things out without government involvement and that it is a purely commercial matter, according to the website BFM.ru.

As of Tuesday, the company’s stock price sat lowly at $1.02 in the New York Stock Exchange, down more than 60% in the past year.

Mechel’s debt problems have become a domestic issue in light of the recent US and EU sanctions. The company has no option but to work a deal out with its Russian creditors as it no longer has access to EU and US markets for refinancing.

“Although a bankruptcy of Mechel looks more likely as it’s clear now that the banks took a tough stance regarding its debt, there is no final decision yet,” Sergey Donskoy, an analyst, said in an interview with Bloomberg. “Mechel’s bankruptcy has been delayed so many times that I wouldn’t be surprised if it’s reconsidered again. The stock has no fair value and is extremely hard to analyze, particularly, because of the debt risk.”

Denis Manturov, Minister of Industry and Trade, however, does not think that Mechel needs to proceeds with bankruptcy, calling those voice “provocations”. He stated that Mechel will be saved and that they parties have already agreed to work through the issue.

Mechel is one of the leading producers of coal in Russia. It employs over 70,000 employees and has been in existence since 2004 when Southern Kuzbass Coal Company merged with Mechel Steel Group.