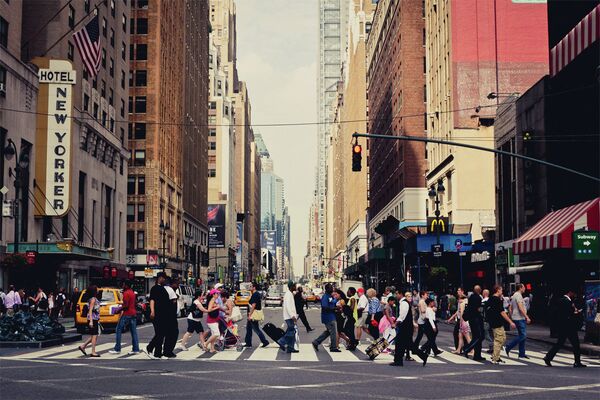 © Flickr / Doris Hausen
Subscribe
The People’s Climate March is scheduled to take place in New York City on Sunday, ahead of the upcoming UN summit on climate change on September 23.

MOSCOW, September 20 (RIA Novosti) – The world’s largest ever march in support of climate change, The People’s Climate March, is planned to take place in New York City this Sunday, ahead of the upcoming UN summit on climate change on September 23.

The march’s organizers expect from 100,000 to 400,000 people to turn out for what they hope will become the largest environmental demonstration in history. Among the march’s participants are groups like Amnesty International, MoveOn.org and the Sierra Club.

According to Bloomberg, over 1400 civil rights organizations, business entities, unions, religious and student groups have signed up for the event, and a total of 140 climate-related events are planned over the coming week.

Separate marches are also scheduled to take place in Nigeria, India and London on Saturday and Monday.

Rosa Marcario, the CEO of California-based clothing company Patagonia, has publically supported the upcoming People’s Climate March scheduled to take place in New York City and is shutting four of the company’s stores in NYC on Sunday until 3 p.m. so that its employees can participate in the march. In an open letter, she writes, “All of us at Patagonia—and especially our colleagues in New York City—felt we could not conduct business as usual on the day of the march. We knew we needed to take our place, help make a stand for future generations and inspire other businesses to do the same.”

She then further adds, “On Sunday, we’re joining a historic community of concerned citizens marching on behalf of the environment at the doors of a meeting of world leaders with the power to make real changes for our future. We stand up for a healthy planet and encourage lawmakers to make climate change an absolute priority.”

This is not the first time that Patagonia, as a company, has taken public action in support of environmental issues. In 2004, the company urged its clients not to purchase its products unless they “needed it”.

Several other companies, such as Target, Coca Cola and Red Bull, have also agreed to cut greenhouse gases emissions, according to a factsheet released by the White House.