Portraits of War-Killed Journalists to Appear on Moscow Streets 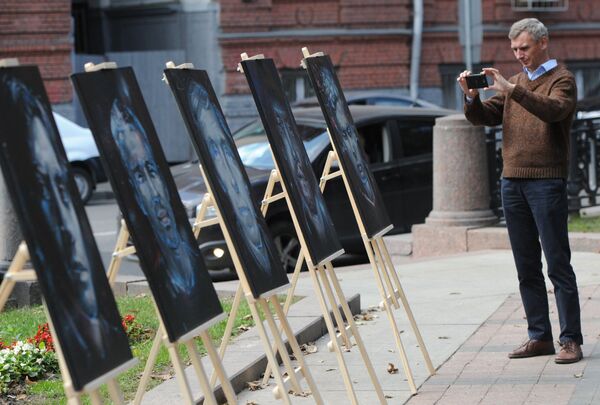 © RIA Novosti . Anton Belitskiy
/
Go to the mediabank
Subscribe
International
India
Africa
Portraits of journalists killed while working in war zones all around the world are being exhibited on one of Moscow’s central streets, Nikitsky Boulevard.

MOSCOW, September 9 (RIA Novosti) – Portraits of journalists killed while working in war zones all around the world are being exhibited on one of Moscow’s central streets, Nikitsky Boulevard.

Igor Kornelyuk and Anton Voloshin were VGTRK employees. They were killed in June during a shelling near Lugansk, eastern Ukraine.

Anatoly Klyan, who worked as a cameraman for Russian Channel One, was shot in a military operation near Donetsk, eastern Ukraine.

Andrei Stenin, a photojournalist working for the news agency Rossiya Segodnya (RIA Novosti), went missing on August 5th. According to information provided by the Investigative Committee of the Russian Federation, he died about a month ago near Donetsk, eastern Ukraine.

Vyacheslav Veremiya, correspondent working for the Ukrainian newspaper Vesti, was killed during the events on Maidan on February 19th.

An Italian photographer, Andrea Rokkelli, died at the end of May near Slavyansk.

At the end of August, the Islamic State had uploaded a video to the web that shows the beheading of American journalist James Foley, who was held hostage in Syria since 2012.

The organizers of the exhibition hope to raise awareness in society about the challenges journalists have to face working in hostile environments and the contributions they make for their countries and the international community at the cost of their own lives.