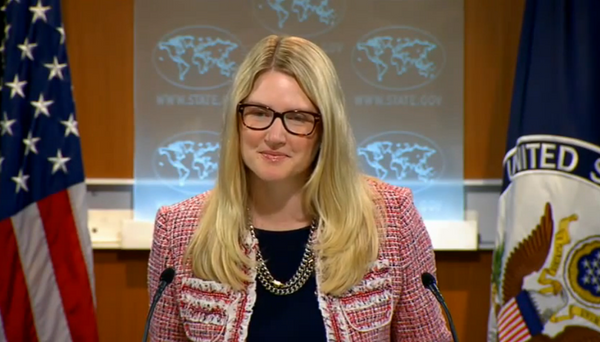 US State Department Spokesperson Marie Harf said Thursday the Washington and its EU partners have not made a decision on new round of sanctions against Russia yet.

WASHINGTON, September 5 (RIA Novosti) - US State Department Spokesperson Marie Harf said Thursday the Washington and its EU partners have not made a decision on new round of sanctions against Russia yet.

“What we are doing this week is talking to our partners in the EU, in NATO about what additional steps and pressure we can put in place on Russia… I cannot outline what they may look like. Obviously sanctions are the key part of that toolbox and we are having these discussions right now,” Harf told reporters.

The United States supports Ukrainian President President Poroshenko’s efforts to find a peaceful resolution to the crisis in the country, but considering Russia as a party to the conflict, the spokesperson said.

Earlier in the day, US Deputy National Security Adviser Ben Rhodes said that US President Barack Obama and leaders of several European countries agreed that more sanctions should be imposed on Russia.

Western countries have introduced several rounds of sanctions against Russia, accusing it of expanding forces on the border with eastern Ukraine and supplying independence supporters with weapons, thus escalating the crisis, a claim Moscow has denied.

On Wednesday, the Ukrainian president’s press service said that, following a telephone conversation with Russian President Vladimir Putin, Poroshenko announced an “immediate ceasefire” in eastern Ukraine. Kremlin spokesman Dmitry Peskov noted that Putin and Poroshenko did not agree on a ceasefire because Russia is not a party in the conflict, but they did discuss its resolution.

The same day, Russian President Vladimir Putin put forward a seven-point peace plan for Ukraine, which will be discussed at the Friday meeting of the Contact Group on Ukrainian reconciliation in the Belarusian capital Minsk.