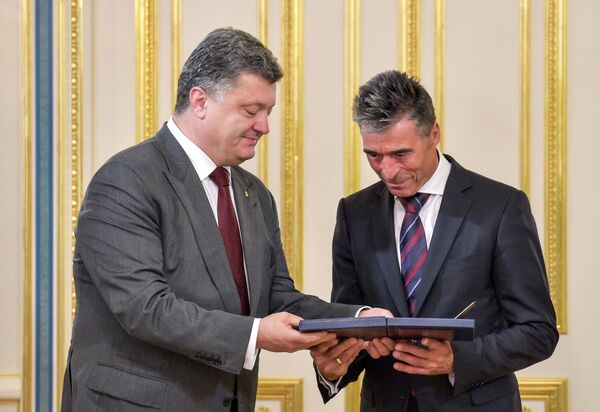 © RIA Novosti . Nikolai Lazarenko
/
Go to the photo bank
Subscribe
Ukraine can ask NATO to provide the government in Kiev with weapons during Ukraine-NATO Commission consultations that will take place within alliance’s upcoming summit in Wales, NATO representative said Wednesday.

However, NATO representative mentioned that if Ukrainian President Petro Poroshenko raises this question, then allies will have to respond to the request separately, but not as organization as a whole.

He added that the alliance as an organization does not have weapons or military equipment, so it will not be able to provide Ukraine with such.

The NATO summit is scheduled for September 4 - 5 and is expected to be attended by leaders and senior ministers from over 60 countries.

However, NATO regulations do not allow countries, involved in territorial disputes, to become members, currently is the case with Ukraine, due to its refusal to acknowledge Crimea’s reunification with Russia.

Earlier, NATO Secretary-General Anders Fogh Rasmussen said that during September’s NATO summit in Wales, the alliance will “take decisions as to how we will enhance our cooperation with Ukraine,” including providing financial assistance for logistics, command and control, cyber defense and aid to military personnel.