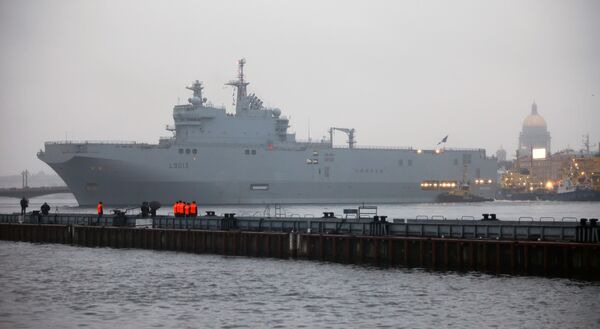 NATO has not considered taking over the order for two Mistral helicopter carriers that France is responsible for delivering to Russia, NATO Secretary General Anders Fogh Rasmussen said at a press conference Monday.

As for France’s standing on the delivery of the Mistral ships, it remains unchanged despite the rising tensions in Ukraine, according to French Foreign Ministry spokesman Romain Nadal.

“I can remind you of the president’s [Francois Hollande] statement that he made on August 20 in an interview with Le Monde, ‘Today’s level of sanctions will not hamper deliveries’,” Nadal said during a Monday briefing.

Russia and France signed a $1.6 billion deal for two Mistral-class ships in June 2011. The first carrier, the Vladivostok, is expected in Russia by the end of 2014. The second ship, the Sevastopol, should arrive in 2015.

The completion of the deal was at risk after Western countries imposed sanctions against Russia over its alleged role in the escalation of the crisis in Ukraine. The French side, however, confirmed that it would fulfill its contractual obligations and deliver the ships as agreed.

The Mistral vessels are expected to be deployed by Russia’s Pacific Fleet. They are both capable of carrying 16 helicopters, four landing craft, 70 armored vehicles and 450 soldiers.