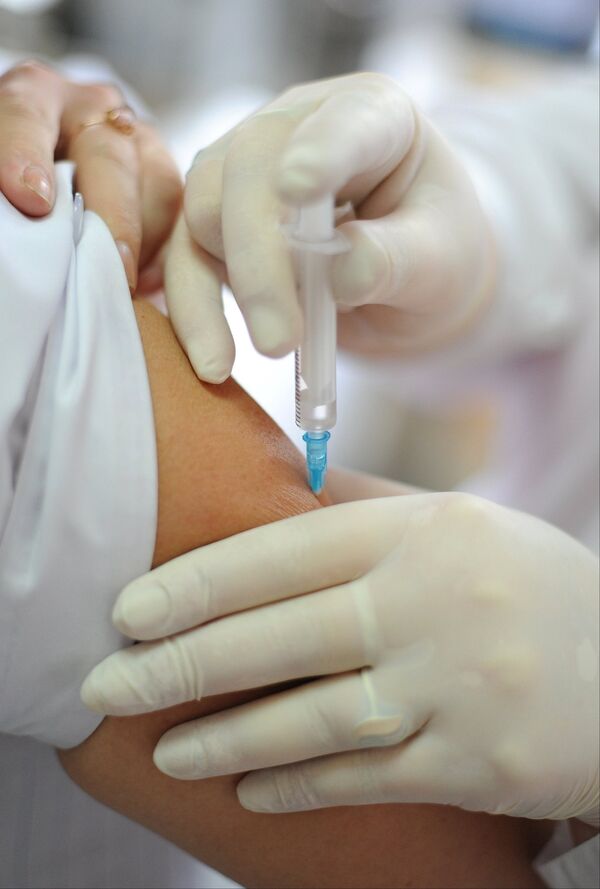 © RIA Novosti . Alexander Komdratyuk
/
Go to the photo bank
Subscribe
A new vaccine developed by US scientists to prevent the spread of the mosquito-borne viral disease Chikungunya has shown promising results in the first human trials but requires additional studies before being approved for widespread use, Reuters reported Friday.

MOSCOW, August 15 (RIA Novosti) - A new vaccine developed by US scientists to prevent the spread of the mosquito-borne viral disease Chikungunya has shown promising results in the first human trials but requires additional studies before being approved for widespread use, Reuters reported Friday.

"Eleven months after vaccination, antibody levels were comparable to those seen in people who had recovered after natural Chikungunya infection, suggesting that the... vaccine could provide long-term protection against the virus," the study co-author Julie Ledgerwood of the US-based National Institutes of Health said.

"The vaccine also generated antibodies against multiple genotypes of the virus, suggesting that it could be effective against any strains of the virus," she added.

In a study published on Thursday in the Lancet medical journal, National Institutes of Health scientists said they obtained impressive immune responses in all 25 volunteers, Americans aged 18 to 50 years old, tested with one of three dosage levels of the vaccine over a 20-week period.

The overall cost of developing the vaccine was approximately $200-$500 million according to Ann Powers, from the US-based Centers for Disease Control and Prevention (CDC). She claims the market may not be financially ready to support the investment.

The vaccine is required to undergo Phase II and Phase III trials using a larger group of people in order to confirm its effectiveness and safety before acquiring approval for widespread use, according to Reuters.

The World Health Organization (WHO) reports there have been almost two million cases of the mosquito-borne illness, Chikungunya, throughout parts of Asia since 2005 including several cases reported recently in France, Italy and the US. In 2013, the Chikungunya virus was found for the first time in the Americas on islands in the Caribbean.

The most common symptoms of the Chikungunya virus infection are fever and joint pain. There is currently no vaccine to treat the virus.