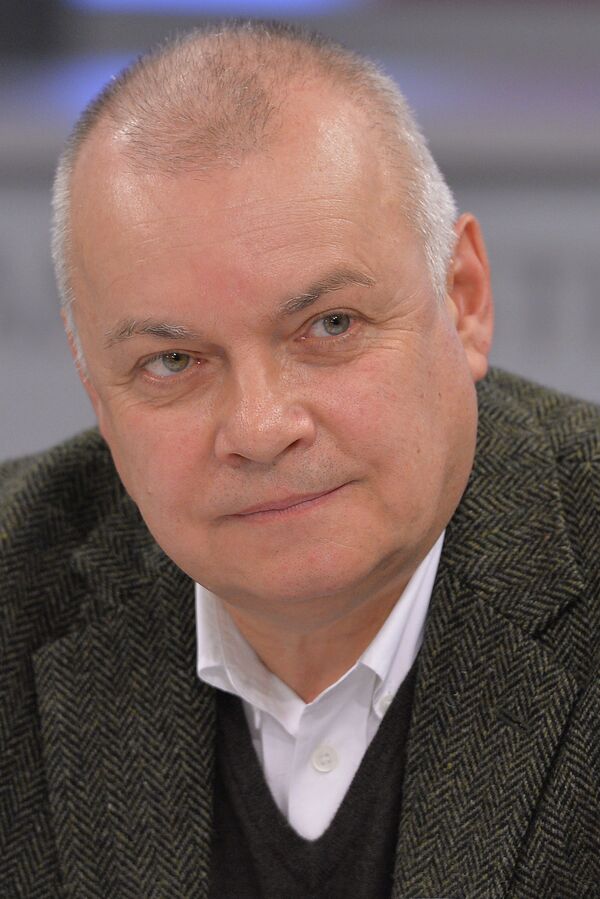 © RIA Novosti
Subscribe
Dmitry Kiselev, the director-general of International Information Agency Rossiya Segodnya, said on Tuesday that the arrest of the agency’s photographer Andrei Stenin, who went missing in the Donetsk Region a week ago, is another evidence of Ukraine turning into a “fatal place” for journalists.

MOSCOW, August 12 (RIA Novosti) — Dmitry Kiselev, the director-general of International Information Agency Rossiya Segodnya, said on Tuesday that the arrest of the agency’s photographer Andrei Stenin, who went missing in the Donetsk Region a week ago, is another evidence of Ukraine turning into a “fatal place” for journalists.

“The good news is that Andrei Stenin is alive. The bad one is that it has been a week since his disappearance. I think the Ukrainian Security Service used this time, firstly, to torture Andrei, because earlier all journalists, that ended up in their hands, were tortured, and secondly, to fabricate this false criminal case about the alleged participation of the journalist in tortures of Ukrainian soldiers,” Kiselev said.

The head of Rossiya Segodnya added that there was no chance that the photographer had in any way participated in the military action, because his duty is to capture images and facts.

“This was Andrei’s job which he did in different war zones, no matter in Syria or Ukraine, but Ukraine turned out to be the fatal place for him, as well as for many more others, because journalists are having a rough time there. In the last three months, five journalists have been killed there and many were captured,” he said.

Earlier today, Kiselev demanded the immediate release of the photographer without any preconditions, and thanked the international community for its support and assistance in the search for Stenin.

An adviser to Ukrainian Interior Minister, Anton Herashchenko, said on Tuesday that Rossiya Segodnya photographer Andrei Stenin, who disappeared in eastern Ukraine on August 5, had been arrested by the Ukrainian Security Service (SBU) on suspicion of “aiding terrorists."

Stenin disappeared last week while on mission in eastern Ukraine, and no information about his whereabouts had been available until today. An unnamed source told RIA Novosti on August 8 that the photojournalist had been abducted by Ukrainian militia forces and was in custody in the city of Zaporozhye, an allegation the SBU later denied.

On August 9, Rossiya Segodnya submitted a request to Ukraine’s Interior Ministry to take urgent measures to find Stenin. The ministry responded to the request three days later under heavy pressure from an OSCE representative for freedom of the press, saying it was looking into the case.