Will Putin Realize That Russia Holds The Cards? 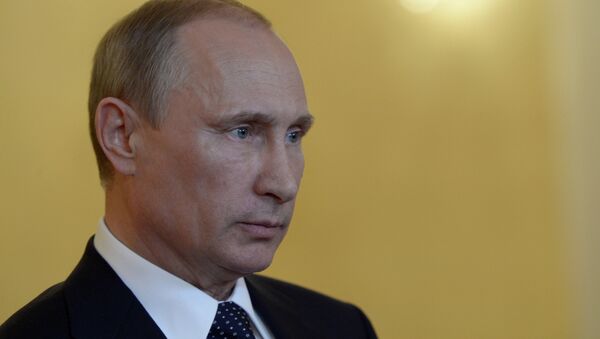 Paul Craig Roberts
All materialsWrite to the author
More evidence, about which I hope to write at length, is piling up that Europe has acquiesced to Washington’s drive to war with Russia, a war that is likely to be the final war for humanity.

The West has mistaken Russia’s low key and unthreatening response to Washington’s aggression as a signal of weakness and now Washington's drive to conflict with Russia is threatening to trigger a war that is likely to be the humanity's last. Evidence is piling up that Europe has acquiesced to Washington’s drive to war — and I hope to write about it at length — but for Russia to save the world from war, it is necessary to make the costs clear to Europeans.

Faced with economic sanctions, essentially illegal and warlike actions, applied to various Russian individuals and businesses by Washington and Washington’s EU puppets and by Switzerland, a country taught to be more fearful of Washington than of Moscow, Russian President Putin has asked the Russian government to come up with countermeasures to be implemented in response to the gratuitous sanctions imposed against Russia.

But, Putin says, Russia must hold back: “Obviously we need to do it cautiously in order to support domestic manufacturers, but not hurt consumers.”

In other words, Putin wants to impose sanctions that are not really sanctions, but something that looks like tit for tat.

The amazing thing about Russia finding herself on the defensive about sanctions is that Russia, not Washington or the impotent EU, holds all the cards. Putin can bring down the economies of Europe and throw all of Europe into political and economic chaos simply by turning off the energy supply.

Putin would not have to turn off the energy supply for very long before Europe tells Washington good-bye and comes to terms with Russia. The longer Putin waits, the longer Europe has to prepare against Russia’s best weapon that can be used to peacefully resolve the conflict that Washington has orchestrated.

Washington’s aggressive moves against Russia will not stop until Putin realizes that he, not Washington, holds the cards, and plays them.

The world has had enough of Washington, its constant lies, its constant wars, and its bullying.  Putin would do well to spend a few hours with Belisarius, Justinian the Great’s great general.

“When I treat with my enemies,” Belisarius said, “I am more accustomed to give than to receive counsel; but I hold in one hand inevitable ruin, in the other peace and freedom.”

That is precisely the position that Vladimir Putin is in with regard to Europe.  In one hand he holds the ruin of Europe.  In the other peace and freedom in the relations between Russia and Europe.

He needs to call up the [expletive deleted] European “leaders” and tell them.

If Putin does not put his foot down hard and make clear to the Europeans what the stakes are, Washington will succeed in its determination to drive the world to war, and “exceptional and indispensable” Americans will die along with all the rest.

Paul Craig Roberts served as an Assistant Secretary of the Treasury in the Reagan Administration. He was associate editor and columnist for The Wall Street Journal and columnist for Business Week and the Scripps Howard News Service. In 1992 he received the Warren Brookes Award for Excellence in Journalism. In 1993 the Forbes Media Guide ranked him as one of the top seven journalists in the United States. He is also chairman of The Institute for Political Economy.