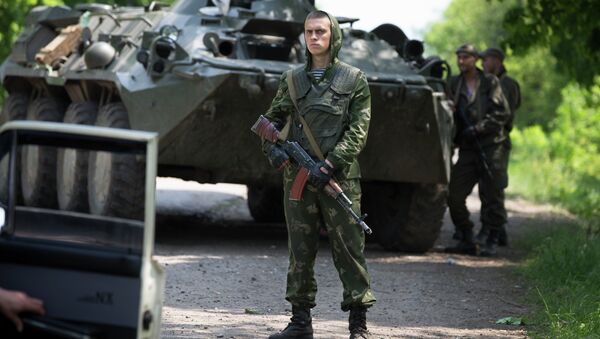 On Tuesday, self-defense forces in the city of Horlivka in Donetsk Region said they noticed a cruise missile flying in about 40 meters above the ground. Shortly after, the missile landed in the proximity of the city of Shakhtarsk, damaging several houses by its burst wave and leaving a crater of 20 meters in diameter.

Earlier, self-defense forces said that Kiev was amassing Uragan MLRS near Donetsk, as their intelligence found them in the villages of Yelenovka and Marinka, as well as on the border with Zaporizhia region.

Also on Tuesday, the first proofs of Kiev using Uragan MLRS were reported. According to self-defense forces, Uragan rocket systems were used near the city of Snizhne. “Several residential houses, as well as a school number 1 were destroyed,” the militia reported, adding that they can provide the parts of Uragan’s missiles as evidence.

Russian Foreign Ministry said Monday that Kiev-led forces continued to re-deploy short-range ballistic missile systems and multiple-launch rocket systems to Donetsk in a move that could threaten the lives of hundreds of civilians.

The ministry said citing a report by the mission of the United Nations Office for the Coordination of Humanitarian Affairs (OCHA), that since the start of the special operation in eastern Ukraine in mid-April, a total of 1,367 people have been killed and another 4,087 wounded, including 2,589 civilians and 29 children.