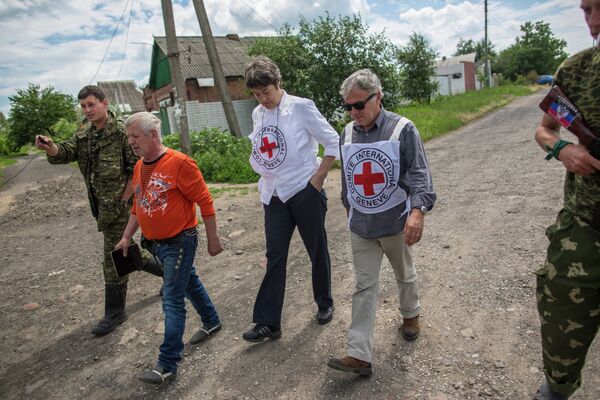 Russian Foreign Minister Sergei Lavrov and the president of the International Committee of the Red Cross, Peter Maurer, discussed future cooperation in solving humanitarian problems in Ukraine, Syria and the Gaza Strip, the Russian Foreign Ministry website wrote on Monday.

“On the 4th of August, a telephone conversation took place between Russian Foreign Minister Sergei Lavrov and the president of the International Committee of the Red Cross, Peter Maurer. The sides expressed their ideas on cooperation in regard to humanitarian problems in Ukraine, Syria and the Gaza Strip,” the statement said.

Ukraine, Gaza and Syria are currently facing the most severe humanitarian crises in the world.

Since Kiev launched its special military operation against independence supporters in eastern Ukraine in April, the Ukrainian Army has often shelled residential areas.

According to UN and World Health Organization data, over 1,129 civilians have been killed and 3,442 injured in the conflict so far. More than 730,000 people have fled the country and are currently sheltered in neighboring Russia.

Russia has repeatedly urged for the establishment of humanitarian corridors to evacuate children from the violence-afflicted region and provide them with qualified medical treatment; however, Kiev has refused to cooperate.

The Gaza conflict has claimed the lives of more than 1,700 Palestinians and more than 60 Israelis since Israel launched its Gaza offensive on July 8 targeting the Hamas movement and its allied groups of rebels. Many injured require urgent medical assistance, while many families have lost their homes. Humanitarian ceasefires in the region are constantly interrupted by shelling.

The ongoing civil war in Syria between the armed rebels and pro-government forces has been raging on for more than three years and killed more than 100,000 people. Millions of Syrian citizens are in urgent need of humanitarian aid, with one-third trapped in combat zones. Some 1,600 schools and more than half of all hospitals have been torn down or severely damaged. Russia has sent humanitarian aid to Syria several times.