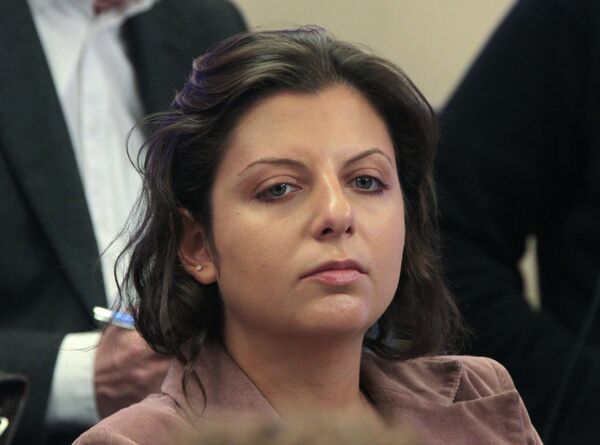 RT Editor-in-Chief Margarita Simonyan said on Sunday she is shocked about the fact that Ukrainian journalists have “reported” their counterpart Alina Eprimian to the Ukrainian Security Service.

MOSCOW, August 3 (RIA Novosti) – RT Editor-in-Chief Margarita Simonyan said on Sunday she is shocked about the fact that Ukrainian journalists have “reported” their counterpart Alina Eprimian to the Ukrainian Security Service.

“I could never imagine that our fellow journalists while shooting a video could tip off security troops about [their colleague], just because she is working for a TV channel which they dislike,” Simonyan said.

“They [security troops] could have done everything with her [Eprimian] and her colleagues knew well about this,” RT quoted Simonyan as saying.

On August 1, RT reported that Eprimian was detained by Ukraine’s security forces and was told to leave the country within two days. The official reason for Eprimian’s deportation is that she had no media accreditation. Eprimian, who holds both US and Russian citizenships, earlier covered events in Ukraine and authorities said that her US passport was just “enough,” RT said.

Eprimian was detained in Ukraine’s province of Transcarpathia just as she was working at the scene to report about Ukrainian mothers refusing to let their sons to join the Ukrainian military.

RT said in an official statement that a Ukrainian journalist, who was also working at the site, noticed the labels of RT RUPTLY and started questioning Eprimian. Other reporters later called the police, who arrived along with Ukraine’s Security Service (SBU) representatives.

The producer was later interrogated and had her materials deleted.

In remarks, Eprimian wrote on Twitter: «They deleted all my footage. Journalists here [are] so proud of themselves now. All they did was show the world what type of country they live in."

Eprimian is the second RT journalist to have been deported in the past months from Ukraine. Ukraine’s Security Service earlier detained RT contributor Graham Phillips in Donetsk. After an interrogation, Phillips was kicked out of Ukraine and banned for three years.

Commenting on Eprimian’s deportation, Phillips wrote on Twitter: «Ukraine media brands @alina_eprimian a 'provocateur'. That translates as 'not a pro-Kiev journalist.'"