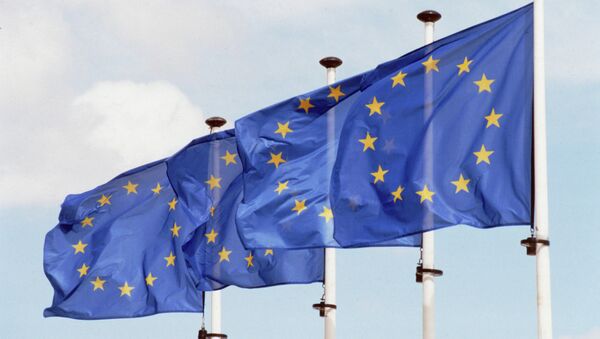 The document, published in the EU Official Journal, prohibits the “direct or indirect purchase or sale of, the brokering or assistance in the issuance of, or any other dealing with bonds, equity or similar financial instruments with a maturity exceeding 90 days, issued after 1 August 2014” by major credit institutions or finance development institutions established in Russia with over 50 percent state ownership.

The restriction also applies to majority-owned subsidiaries of the five blacklisted banks established outside the union and, as well as to “any legal person, entity or body acting on behalf or at the direction” of the targeted institutions.

Earlier in the day, the European Council gave its final approval to a new batch of “restrictive measures” against Russia over the Ukrainian crisis.

The decision came just two days after the 28-member bloc slapped additional economic sanctions on Russia, which limited its state-owned financial institutions' access to EU capital markets, imposed an embargo on trade in arms, established an export ban for dual-use goods for military end users, and curtailed the nation’s access to sensitive technologies, particularly in the oil sector.

The first round of sanctions against Russia was implemented by the United States and the European Union back in March as a response to Crimea’s reunification with Russia following a referendum. Moscow has repeatedly said that the measures are counterproductive, and labelled the sanctions “a road to nowhere."