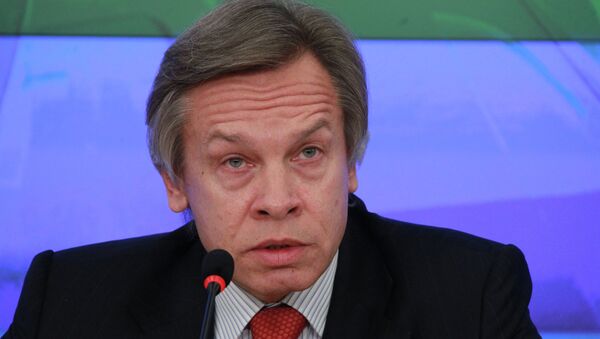 “Obama will go down in history not as a peacemaker – everyone has forgotten about his Nobel Peace Prize already – but as an American president who launched a new cold war,” the head of the committee for international relations in the State Duma, Russia’s lower house parliament, wrote on his Twitter page.

Earlier in the day, Obama said that there is no new cold war with Russia and that the US will continue discussions with Moscow to find a diplomatic solution to Ukraine crisis.

On Tuesday, the United States and the European Union announced a new round of sanctions against Russia, once again accusing Moscow of supporting independence forces in eastern Ukraine. Washington introduced sanctions on three more Russian banks, namely the country's second-largest banking group VTB, the Bank of Moscow and the Russian Agricultural Bank, as well as the state-owned United Shipbuilding Corporation.

Additionally, Obama said that the US would also be blocking the exports of specific goods and technologies to the Russian energy sector, expanding sanctions to more banks and suspending credit that encourages exports to Russia.

Russia repeatedly denied accusations that it is supplying Ukrainian militia with arms and called the "language of sanctions" counterproductive.