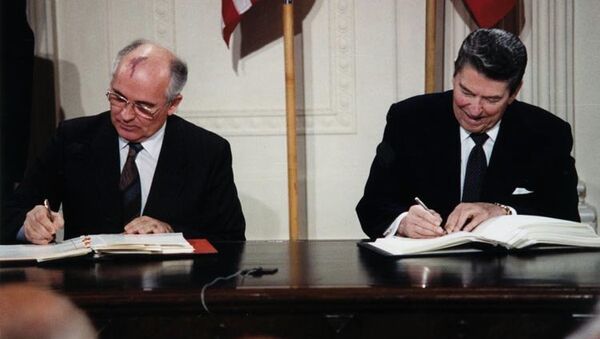 Earnest announced that US President Barack Obama sent a letter to President Vladimir Putin on this issue.

The INF treaty between the Soviet Union and the United States was signed on December 8, 1987, and took effect on June 1, 1988. After the collapse of the Soviet Union, all the CIS states became parties to the treaty. Apart from Russia and the US, the countries bound by it are Belarus, Kazakhstan and Ukraine.

The US was to destroy the Pershing II intermediate-range ballistic missiles, the BGM-109G land-based cruise missiles and Pershing-1A short-range missiles.

According to a memorandum of agreement on source data to the treaty, upon its signing the Soviet Union had 1,752 missiles of five types and the US had 859 missiles of three types to destroy.

In May 1991, the treaty was completely fulfilled. The Soviet missiles were blown up, which meant the total destruction of missile carriers, while 72 Pioneer missiles were destroyed by being launched. The US Pershing missiles were scrapped by static burn, with their control systems preserved and further used to produce intermediate-range missile targets.

The production facilities were also destroyed as were the operation bases and training sites (a total of 117 Soviet and 32 US facilities).

For the first 13 years, the parties ensured adherence to the treaty through regular mutual inspections, including permanent inspections of the Votkinsk engineering plant in Udmurtia and the Hercules plant in Magna, Utah.

A special control commission was set up to hear any issues regarding the fulfillment of the treaty and measures to improve viability and efficiency. The commission held 29 meetings, the last one took place in 2004.

The right of the participating states to hold local inspections under the treaty expired on May 31, 2001. However, oversight has continued via satellite. The member states can call for a commission meeting at any time.

In October 2007, Russian political and military officials suggested that the treaty obligations become globally binding. The US upheld the initiative. The two states drafted and distributed a respective joint statement at the 62nd session of the UN General Assembly.

The INF treaty has an indefinite term. However, any party may terminate it by providing convincing evidence of the need to withdraw.