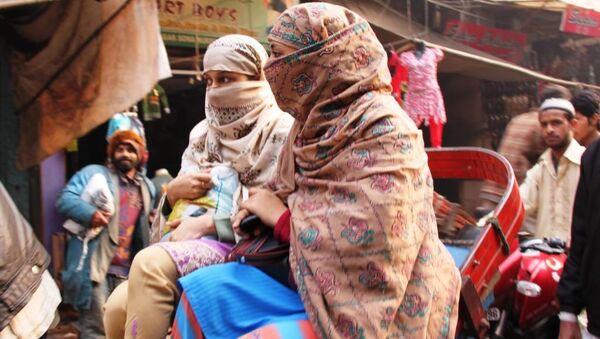 © RIA Novosti Evgeni Pakhomov
Subscribe
Sarah Neary
All materials
India's acid attacks are being considered worse than rape as the victims, who are usually female, are taunted and tormented on a daily basis, according to Stop Acid Attacks activist Suneet Shukla's opinion on the matter.

India's acid attacks are being considered worse than rape as the victims, who are usually female, are taunted and tormented on a daily basis, according to Stop Acid Attacks activist Suneet Shukla's opinion on the matter.

Cheap acid that can be purchased off a bicycle and in small shops is being bought up and thrown into the flawless faces of India's women.

While the government is lagging behind on the policy on paper, people are speaking out about their grim and gruesome encounters with acid.

Suneet Shukla told Rossiya Segodnya how acid attack survivors learn to rebuild their lives one milestone at a time and that the attackers are getting away with an act considered to some, as worse than rape.

Just 25 rupees (41 cents) is all it costs to ruin someone's life in India, with the most targeted gender being female.

While the price for the toxic chemical may vary from one region to another, the results are always irrevocable. This barbaric act is usually done when a man is rejected by a woman. Either she does not accept his sexual advances or even marriage proposal.

Instead of accepting a firm no from the woman, he finds a way to get his revenge. A woman's face, sight, hearing, and outer visible beauty could be ruined in mere seconds thanks to a careless act done as a way of retaliation and the idea of 'if I can't have you, nobody can' type of mindset.

"She has to live with that for the rest of her life in her society. Acid attackers get away with this, the victims of acid attacks cannot go out into the world with confidence," Stop Acid Attacks activist Suneet Shukla said to the Rossiya Segodnya, then added, "On a personal level, it is equally tragic."

While acid attackers, the vast majority being reported as men, splash acid on their victims like it is nothing out of the ordinary, the victims or rather survivors of these cruel acts are left in a state of paranoia, often finding it hard to socialize with others.

Once acid is thrown on the face, it has been said by victims that their skin melting off their body sounds likes dried leaves crackling—an utterly chilling experience.

"Most of these women are shunned and isolated because of this [acid attacks] in society," Shukla said. A lack of support from both their family, who believes that they probably deserved the acid to be thrown on them, and lack of funding from the state puts India's females in a dire situation.

When it comes to treating a person who has aggressive acid burns, there is no relying on the state as the main caretaker in terms of financial or medical help. Public hospitals' burn wards are a disgraceful looking as the conditions are far from acceptable. Victims are made to wait in long lines for hours, with at times 50 people queued up, waiting to be treated for their aliment.

No sooner does the burn victim get to see the doctor than they are back out the door they came in as the amount of patients is way too high for hospitals to hold the patients overnight. Proper treatment can be given in private clinics but most acid attack victims have very little money to splurge on an effective treatment for their ailing condition.

Up-to standard hospitals are rare gems many of these women cannot get their hands on and while that is true, it is ever harder for them to go through much needed counseling sessions after their traumatic experience.  It is merely a luxury in India that is desirable but unattainable for burn victims.

Even if they are able to get reconstructive surgery, the pain still burns within their soul, their mind is still haunted by the day their lives changed, and more importantly, the physical scars may fade but the mental scars run a lot deeper.

Shukla pointed out to Rossiya Segodnya that the government compensation scheme for acid attack victims is anything but generous.  If a woman losses her breast to an acid attack or a part of her body becomes mutilated, what the government offers, three lakh (almost $5,000 USD), is nothing.

A victim must use this money for all of their needs which is an impossible task to execute on such a petty pay out.  Mere chump change is being handed over to females that are young, ambitious, and ready to start accomplishing their goals in life, however the cheap and deadly chemical puts a hard halt on their future, with some female victims on the brink of death.

Police are slow to react to acid attack incidents, which only causes an increased amount of frustration in villages and cities alike.

With unsolved acid attack cases having become lukewarm and those convicted of the barbaric act set lose years before due time, this only makes India's survivors all the more hostile toward the government's inability to adapt to the unfair circumstances which has happened to them.

Struggling for every bit of dignity they have, women who have had their faces melted off from an acid attack are looking for two vital keys at the end of the day, justice by having their attacker put away in prison and respect from society.

If these two parts cannot be given to women who have become victims of such heinous crimes, the fight will continue on. The government, police, family, and attackers have all cast a dark shadow on the ravaged females. Beyond the physical beauty that was so unfairly splashed away thanks to acid burns, is an inner beauty that can only be reignited through regaining the strength, courage, and agility to move on and live life post acid attack.