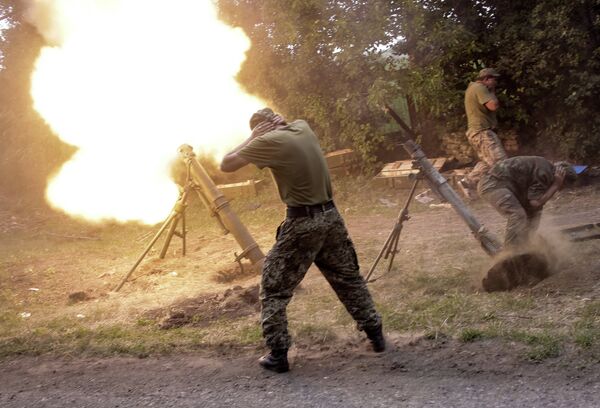 A large convoy of Ukraine’s National Guard armored vehicles entered the city of Shakhtarsk in Donetsk Region, aiming to complete the siege of Donetsk, the clashes in the streets broke out, a local militia representative told RIA Novosti on Sunday.

DONETSK, July 27 (RIA Novosti) – A large convoy of Ukraine’s National Guard armored vehicles entered the city of Shakhtarsk in Donetsk Region, aiming to complete the siege of Donetsk, the clashes in the streets broke out, a local militia representative told RIA Novosti on Sunday.

According to the militia, the sound of shelling can be heard in the outskirts of the city. Air raid sirens went off in Shakhtarsk, some cellular phone providers stopped operating, the streets are empty.

An hour before the fighting began, the local residents reported they saw a large convoy of Ukraine's National Guard tanks heading towards the city.

If the Ukrainian Army occupies the city, they will be able to observe the main road leading to Luhansk and Russia. The cities of Donetsk, Gorlivka and Makiivka, currently controlled by the independence supporters, will be completely surrounded.

Shakhtarsk is one of the key cities of the east of Donetsk Region with a population of 60,000 people. The city is located only 10 kilometers away from the Malaysian MH17 crash site, collapsing there on July 17, with no survivers among the 298 people on board.

On Monday, the Ukrainian military and independence supporters agreed on a ceasefire within a 40-kilometer (25 miles) zone around the Malaysia Airlines Flight MH17 crash site in Donetsk Region, to provide access to the area for the international investigators.

The military operation launched by Kiev in the south-east of Ukrainian has been underway since mid-April, when the Luhansk and Donetsk Regions refused to recognize the legitimacy of the new government. The fighting intensified after Donetsk and Luhansk regions proclaimed themselves independent people’s republics. Hundreds of people, including civilians have died in both regions over the past months.

Kiev authorities and independence supporters have been trading blame for the downing of the plane, with independence supporters insisting they lacked the technology to shoot down a target flying so high. Earlier this week the Russian Foreign Ministry urged both sides of the Ukrainian conflict to end military actions around the crash site to ensure the security of international aviation specialists that arrived in eastern Ukraine shortly after the accident.