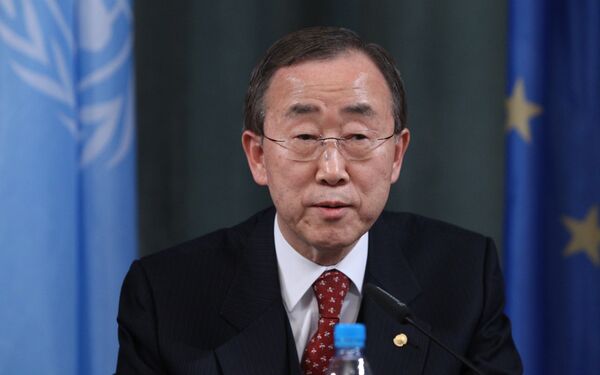 © RIA Novosti . Vladimir Fedorenko
/
Go to the photo bank
Subscribe
UN Secretary General Ban Ki-moon on Thursday called on the world community "to spare no effort" to stop violence in Syria and introduced his two new envoys for Syria.

“We will spare no effort to help stop the violence and achieve a Syrian-led inclusive political solution that meets the democratic aspirations of the Syrian people,” Ban said, adding that “the Syrian people have suffered enough and too long. It is time for action, and it is time for peace.”

Intoducing UN's Special Envoy for Syria Staffan de Mistura Ban said that de Mistura “brings to the position decades of experience with the United Nations in conflict-affected areas, including Somalia, the Middle East, the Balkans, Nepal and, most recently, as Special Representative of the Secretary-General in Iraq and in Afghanistan.”

De Mistura is replacing former UN envoys on Syria Lakhdar Brahimi, and Kofi Annan before him, both of whom resigned.