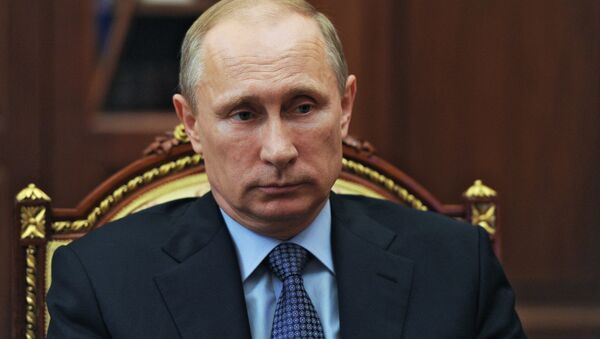 Subscribe
Russian President Vladimir Putin said Thursday Moscow didn’t object to Ukraine receiving financial aid from the International Monetary Fund and other big lenders, but stressed they should prevent the money from being used to wage war on civilians in the east.

BRASILIA, July 17 (RIA Novosti) – Russian President Vladimir Putin said Thursday Moscow didn’t object to Ukraine receiving financial aid from the International Monetary Fund and other big lenders, but stressed they should prevent the money from being used to wage war on civilians in the east.

“Of course, we are all up for supporting Ukraine financially, meaning the people of Ukraine, and not some oligarchs or swindlers,” Putin said during a press conference in Brazil.

“The [IMF] fund has traditionally abstained from providing financial assistance to countries at war, and I think it is the right thing to do. I believe this tradition must be upheld in Ukraine’s case. As a rule, a country at war is given money for one goal and it spends the cash on quite another,” Putin noted.

Kiev received the first IMF tranche of $3.16 billion in early May after the fund approved a $17 billion loan to Ukraine in the form of a two-year stabilization program. Ukraine is expected to receive a total of $27 billion from international donors such as the IMF, the World Bank, the US and the EU. From this sum about $14 billion is to come in 2014.

Putin urged the IMF to think of such control instruments to monitor the distribution of financial aid in Ukraine so as to see to it that this money is channeled into the nation’s social and economic spheres, and not siphoned off by murky private banks or stolen.

“A significant share of resources was meant to shore up the country’s banking and financial sectors. As far as I know, a hefty portion of these financial means was transferred to private banks run by Ukrainian oligarchs. Where is this money? What’s become of it? Who was it pocketed by? Neither the IMF nor the Ukrainian community has a clue,” Putin said.

“I think they need to stop military activities first. Only then would it be OK to give them money. Besides, a portion of the resources that were received [by Ukraine] as its first tranche were to be spent to pay off its foreign trade debts, for instance the debt for Russian fuel, and we’ve seen none [of that money],” Putin said.

He suggested that the fate of the cash injected by the IMF in Ukraine in May was similar to multi-billion loans that Moscow gave Kiev at the turn of the year 2013. The money, he said, wasn’t used to acquit Ukraine’s debt with Russia or pay for further gas deliveries.

“A big question is where our money has gone,” the president said.

He also blamed countries that are pushing Ukraine towards the precipice of disintegration for shifting responsibility on others.

“One should be very careful about how government institutions are treated because when they are neglected the imminent consequences are always dire, it is disintegration and internal conflicts as the ones we are now witnessing in Ukraine,” Putin emphasized.

He said the United States seemed to be pushing Ukraine to a civil war and a continued punitive operation against the east, saying this policy was doomed to fail.

Since mid-April, Ukrainian authorities have been conducting a special military operation in eastern Ukraine to suppress the independence movement in the country. Hundreds of civilians have died over the past months as a result of the conflict. In April, US government pledged of $8 million in “non-lethal” military aid to Ukraine.

Moscow has repeatedly called on Kiev to immediately put a stop the violence and resolve the conflict through peaceful dialogue.