OPINION: Despite Destruction of Chemical Weapons Syria to Retain Power in Middle East 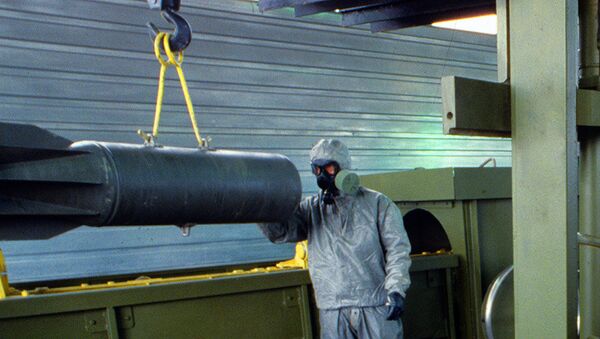 While Syria has started destruction of its chemical weapons stockpiles, some believe that when all the weapons are destroyed, Syria will lose the leverage against its neighbors. But experts say that Damascus will still have ruffs to play with.

While Syria has started destruction of its chemical weapons stockpiles, some believe that when all the weapons are destroyed, Syria will lose the leverage against its neighbors. But experts say that Damascus will still have ruffs to play with.

About 200 tons of Syrian toxic chemicals have been delivered to the UK for disposal.

The Danish ship Ark Futura started offloading the first containers at Marchwood port in Southern England under the supervision of members from the Organization for the Prohibition of Chemical Weapons. According to a spokesman for the British Prime Minister, the country agreed to receive 150 tons of the Syrian chemicals and 50 tons of other substances.

British experts are preparing to transfer them into specialized industrial labs. Then the chemicals will be destroyed by French company Veolia Environmental Services at the port.

Syria agreed to destroy its chemical weapons stockpile last year. In June, Syria finished handing over its 1300 tons of chemicals to avoid US airstrikes after a scandalous chemical weapons attack occurred in a rebel-held suburb near Damascus. The chemicals are being destroyed in various countries.

Joshua Landis, Associate Professor and Director of the Center for Middle East Studies at the University of Oklahoma said the deal has turned out to be fairly good.

Mr. Landis, who is also the President of the Syrian Studies Association, however said that the process will undoubtedly be fairly expensive and lots of precautions have to be taken not to allow anything to escape into the atmosphere.

But Mr Paul Walker, Director of the Environmental Security and Sustainability at Green Cross International , argues that it is very expensive, on the one hand,  but on the other hands, it is very small, compared to what Russia and the US have been spending themselves on their own destruction programmes.

Joshua Landis thinks the deal also opens the door to greater US-Russia cooperation on the Syrian file. Unfortunately, so far there has been little attempt by Russia and the US, little ability to close the gap in their differences, he says. On Wednesday, July 16, there was the inauguration of the third term of President Assad and this underlines some of the differences between the US and Russia on how to settle Syria. But it is quite clear that Assad is not stepping aside as the US and the UN has called for. And his inauguration underlines the fact that he is here to stay, and the victories in the battlefield also suggest that he is going to be in the future of Syria for a long time to come.

Mr Landis also stressed that some believe that when all the chemical weapons are destroyed, Syria will lose some of its leverage with Israel. Israel feels it can attack Syria at will. On the other hand, Israel is very worried about the rebels.  And with the rise of the ISIS, Israel has re-thought its relationship to Assad in many ways.

Israel had a peace agreement with Assad since 1974. There has not been any violence across Syrian-Israeli border. So, undoubtedly, Israel is very worried about the potential fall of Assad. And this is the biggest leverage Assad has for Israel.